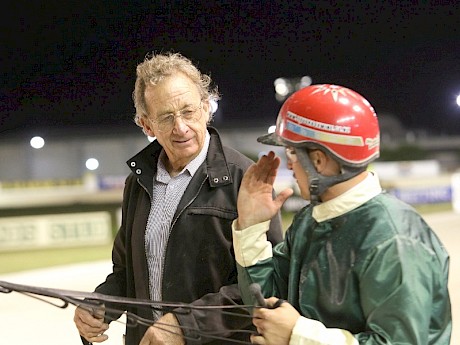 Ray Green gets the lowdown from stable driver Zachary Butcher after a race at Alexandra Park.

Green’s been there, done that, but now he’s staying put churning out the winners

Johnny Cash could well have been referring to Ray Green when he sang “I’ve been everywhere, man”.

From the day Lincoln Farms’ main man set off in 1977 on a boat to Prestatyn in North Wales, looking after 10 horses en route through the Panama Canal, he’s experienced all kinds of harness racing.

During six years training and driving there, when he escaped the harsh winters moving to places like Pompano Park in Florida or in Italy, Green picked up all manner of skills.

And while he returned to New Zealand for a stint working for Ron Hanford in Mangere, and even went fruit picking in Australia, he ended up back in Britain training and driving for a wealthy owner.

Five years later he was on the move again, this time to Maryland in the United States to train and drive for three years.

Green and his wife Deborah eventually returned home, young toddler in tow, to find the industry booming amid a bullish sharemarket.

Green continued pottering round with horses and when Ray Norton retired in 2004 he landed the job as co-trainer for Lincoln Farms, along with Robert Mitchell.

In five seasons the pair notched 80 winners before Green took over sole responsibility for the team in 2009.

And he has never looked back. Now in his 11th season solo at the helm, Green has 3297 more winners to his name, continuing to develop good pacers for John and Lynne Street.

It’s a far cry from the future predicted for Green by his first employer in the industry, the late Doug Grantham.

The 16-year-old had been with Grantham for only three months when he was told he’d never be any good at it and he should try something else “like sheep farming.’’

Green, unperturbed, set about ringing trainers in the north and one of the first he called was the maestro Peter Wolfenden.

“I told him I’d been sacked and when he heard I’d lasted as long as three months with Grantham he said I’d better come and see him.

“I was with Wolfie for five years and even got to drive Cardy a few times.’’

Cardigan Bay had only just returned from Perth, where his Interdominion trip ended in disaster after a training mishap, and Green says it wasn’t known if he’d ever race again.

Green has trained some special horses in the interim and while has yet to find that out and out champion, he says at Lincoln Farms he has every chance to do so.

“Training is easy now but the key is you’re only as good as your stock and your help.

“We have a good bunch here at the moment - I’ve got good drivers helping, Zachary Butcher, Craig Sharpe and our junior Andrew Drake.

“My wife comes in in the afternoons and does all the massaging and treats all their lumps and bumps and we have Phil Sattler, Leigh Argue and Crystal Delaney doing the stalls and sweeping.’’

Add to that the vital farm and paddock maintenance carried out by Street, on his tractor, and his brother Kevin, and the odd jobs done by “gopher” Les Purdon and you have a solid unit.

Green says while he learned a lot overseas, much of it can’t be implemented here with different medication rules and styles of racing.

“Young horses is where it is at for us now, it’s all about two-year-olds and three-year-olds.’’

Bread and butter horses don’t get to enjoy the facilities at the Pukekohe barn for long, Street replacing them every year with another bunch of well bred yearlings in his hunt for the best.

Even horses like the well performed four-race winner Lincoln Road are given their marching orders.

“It’s got a lot harder for him now with the open class horses all over him. He’ll pick up the crumbs at best and there’s no future in that.’’

His globe-trotting days might be over but Green, 72, is showing no sings of slowing down. 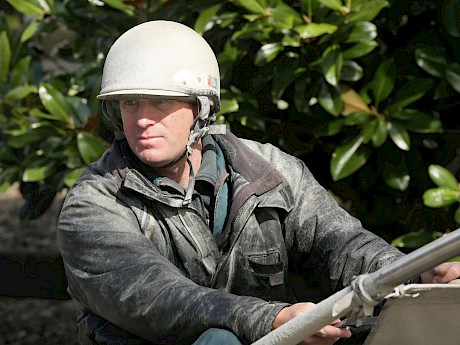 Craig Sharpe… an integral cog in the Lincoln Farms’ wheel.

Sharpe, who has been with Lincoln Farms for six years, notched three winners in the cart earlier in his career and scored another win in the amateur ranks in May, 2018.

But he his more proud of his training achievements and apart from being an integral cog in the Lincoln Farms’ wheel, he potters round training the odd horse himself.

Sharpe took over veteran trotter Rarangi Jewel when he saw the horse advertised for sale - “I thought he would give me something to do in my lunch hour.’’

Rarangi Jewel credited Sharpe with his maiden win when scoring at Cambridge in September, 2016 and he has gone on to claim 10 more winners. 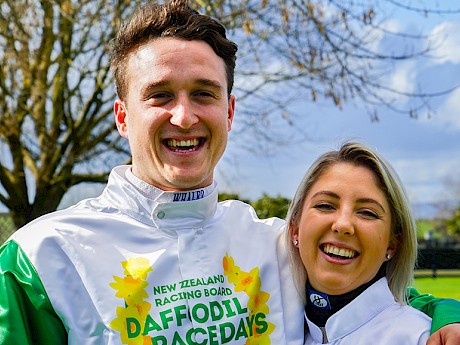 Lincoln Farms pulled a masterstroke in April when it lured Zachary Butcher from the leading stable of Barry Purdon.

Few young reinsmen have made such a fast impact as Butcher, 28, who in just 12 full seasons in silks has already notched 784 wins from 5598 drives, earning $10 million in stakes for connections.

Butcher hogged all the headlines in 2012, his fifth and last season as a junior driver, winning 114 races to finish second only to champion driver Dexter Dunn.

And who could forget his triumphant celebration in the final race of that season at Alexandra Park when he stood high on the sulky shafts after getting Jonny Wilkinson home to pip his dad David by one win.

But it didn’t take Butcher long to eclipse his 322 wins as a junior after he teamed with Purdon, driving a succession of big race winners, not the least the second and third Harness Jewels wins bagged by Sky Major.

Head-hunting Butcher made perfect sense for Lincoln Farms as the young gun had already driven 35 winners for the stable in the previous three seasons.

Leading driver at Alexandra Park last season with 28 wins, Butcher’s skill in the cart is a real asset for Lincoln Farms. 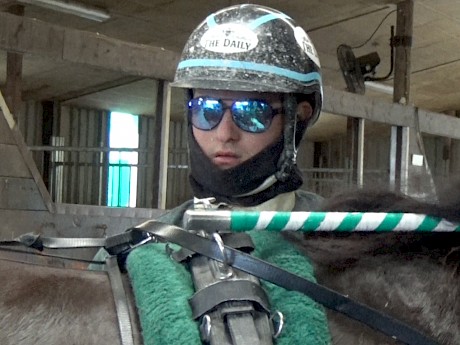 Andrew Drake… has taken up the junior drivers’ role at Lincoln Farms.

Andrew Drake really landed on his feet when he found himself out of work in August, 2016.

Drake had only just resigned from his job with Cambridge trainer Todd Mitchell when his big OE to Scandinavia fell through.

But luckily for the junior driver, Lincoln Farms’ trainer Ray Green heard of his plight and took him on at the leading Pukekohe barn.

Green was on the lookout for another junior with the stable’s own Andre Poutama just having come out of his time.

Drake, Palmerston North born and educated, started in harness racing with Stephen Doody, then partner of his mum Tracey.

And while it took him 47 drives to notch his first winner - Eyre Hostess at Manawatu in February, 2015 - he never lost his enthusiasm.

A nine month stint in Perth proved frustrating for Drake, who had few opportunities, so he returned to Doody before moving north to work for Mitchell in January, 2016.

He trained his first winner when Bubble Gum scored at Manawatu in November, 2018. He has since trained Bubble Gum and Bettor Trenz to win.