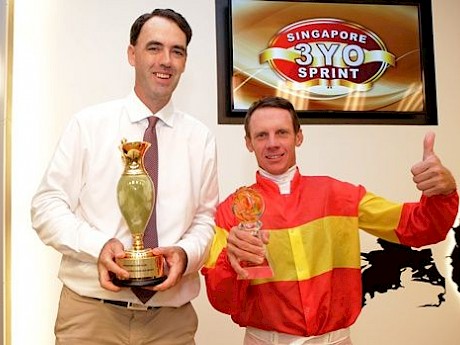 Shane Baertschiger with John Powell, who is No.1 stable rider for Lincoln Farms, after his win with Be Bee in the Three-Year-Old Sprint at Easter.

Baertschiger enjoyed one of his best weekends over Easter when last year’s juvenile champion Be Bee won the $250,000 Singapore Three-Year-Old Sprint before Aramco bagged the $200,000 Group III Rocket Man Sprint.

Baertschiger, who took over in Singapore on the retirement of his father Don, began his career as stable supervisor at Bukit Time in 1996. He was granted his assistant trainer’s licence in 1999, just before the move to Kranji.

In 2013 in just the second year out on his own, he landed the Kranji Sprint with El Milagro.

Baertschiger finished third on the premiership in 2017 behind Michael Walker, saddling 61 winners.

He has eight horses in work for Lincoln Farms. 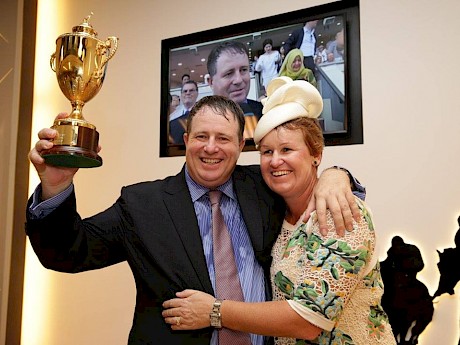 Stephen Gray, son of respected Kiwi trainer Kevin Gray, moved to Singapore in 2000 and quickly climbed through the grades to be among the most successful trainers at Kranji.

One of Gray’s best moments in Singapore came when over one weekend he bagged the 2017 Singapore Gold Cup with Bahana and the Group II Barker Trophy with Lim’s Cruiser.

Gray, who trained 33 winners last season, has six horses in training for Lincoln Farms at his Copper Belt stables.