With 14mm of rain forecast overnight and a little more on Friday, Platinum Rapper could make nonsense of the bookies’ opening $26 price for her in Saturday’s $50,000 Marton Cup (2200m).

Lisa Latta’s mare is the second rank outsider for the 2200 metre feature but she is going better than her form suggests and needs only a rain-affected track to be a real threat.

Awapuni was already rated a dead 5 this morning and Latta says if conditions stay in that range it would be perfect for Platinum Rapper.

“She doesn’t like it too wet but a few showers would definitely help her cause,” Latta said.

“She looks fantastic and has worked very well and we’re looking to add some black type to her pedigree page here.”

Latta said many punters might have missed the merit of Platinum Rapper’s last run, when eighth in the Manawatu Cup (2300m) run on a dead 4 track. 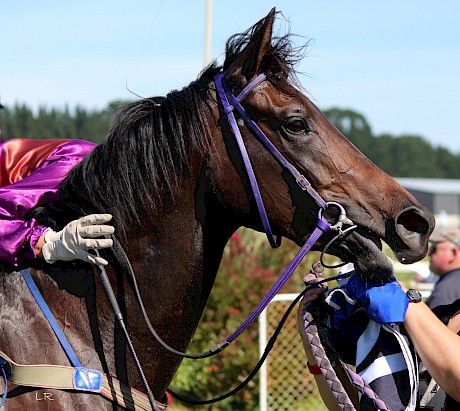 Platinum Rapper … going better than her form suggests.After being slow away, and settling midfield, the mare made a likely looking run approaching the home turn where she was pushed wide by Nymph Monte.

But, once balanced, Platinum Rapper maintained a strong run to the line to finish just 3.4 lengths from winner Hunta Pence and only half a length behind stablemate Platinum Invador, who went on to be beaten by one 2000th of a second in the City Of Auckland Cup.

Latta has moved to address Platinum Invador’s tardy starting manners by requesting the use of a barrier blanket on Saturday.

“She’s done it (been slow) a couple of times before and I would like her to jump with them and get handier.

“She has drawn out in 11 but I’m not too concerned because, if she can jump well and put herself up in the first four or five, she will get a nicer trip.”

Platinum Rapper, who is paying $5.25 for a place, will again be ridden by Leah Hemi and with only 53kg has a 7kg weight pull on $2.30 favourite Beauden.

That’s 2.5kg lighter than she carried two starts back when pipped half a head by classy stablemate Sir Nate over 2100 metres - on a slow 7 track. 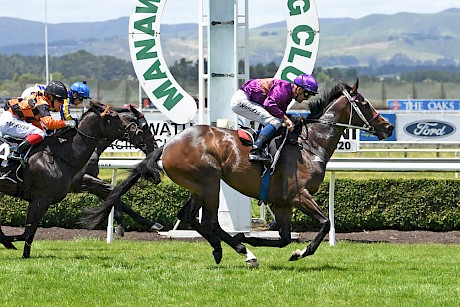 Lincoln Falls was very impressive winning fresh-up last month. PHOTO: Peter Rubery/Race Images.Latta is excited to have classy galloper Lincoln Falls back and says he has trained on a treat since his first-up win.

“This looks a very similar field to the one he beat last start and I expect him to be hard to beat again.”

But Latta is also wary of the second-up syndrome when the five-year-old tackles the second race.

“When they win that impressively first-up after such a long layoff you’re always worried how they’ll go second up.”

Lincoln Falls had not raced for nearly 20 months when he unleashed a terrific home stretch sprint to win at Awapuni on December 19, after being given a long spell to recover from a tendon injury.

But with Jonathan Riddell up again, from a good five gate, Latta is hoping the horse can win again and start making up for lost time.

Lincoln Star rounds off what could be a successful day for Lincoln Farms in the eighth race, the consistent galloper drawn one and coming off a last start second, pipped just a head.

Latta said he too could get his favoured conditions.

“He doesn’t like it really firm or wet - it was the tricky slow Trentham track that tripped him up.”

That eighth was the only blemish in his form line over the last three months and with Ashvin Goindasamy claiming down to 56.5kg, he gets in at a fighting weight.