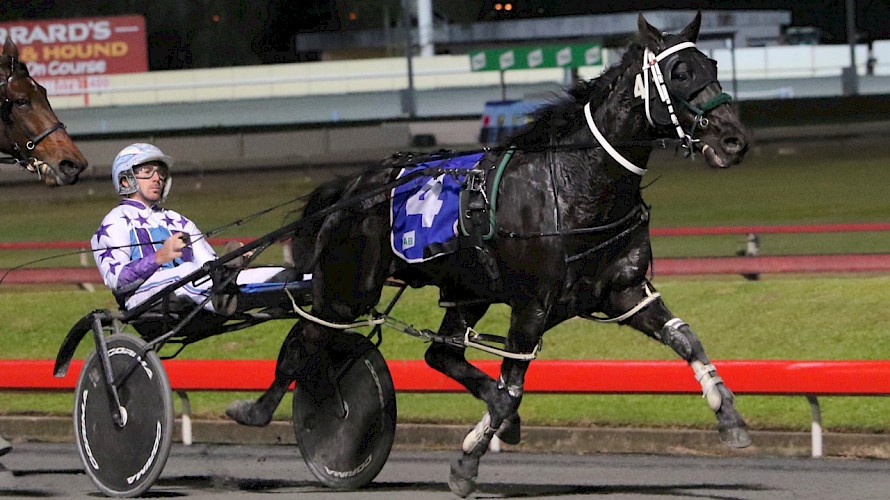 With two runs under his belt, Northview Hustler will strip fit for Saturday night at Albion Park. PHOTO: Dan Costello.

Hayden Barnes will have to drive for luck after the barrier draw virtually took Northview Hustler out of play for the first of Albion Park’s three winter features on Saturday night.

Stranded on the outside of the arm, the Hustler looks to face an impossible task in the A$21,160 Wondai’s Mate with Queensland champion Colt Thirty One drawn inside him along with a number of other gate flyers.

Lincoln Farms’ trainer Al Barnes is resigned to the Hustler going back at the start.

“I could see a bit of power early so the plan will be to try and find a hole and slot in.

“I just hope we don’t end up back last as that puts us out of the race.

Barnes doesn’t buy into the theory that the Hustler isn’t a miler even though he has yet to win in 17 starts over a short course in Brisbane and New Zealand.

“He just hasn’t had the chance to win over a mile, certainly since he’s been here. He’s always drawn out wide or on the second row.

“If he could lead, they wouldn’t beat him.”

Barnes can see an exciting race unfolding with the Darren Weeks’ pair Lilac Flash and Major Cam drawn the two inside slots, Colt Thirty One in five and gate blazer Glenferrie Hood in six. 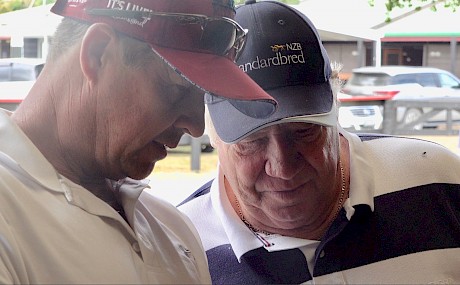 Al Barnes, left, checks out the pedigree of a yearling with Lincoln Farms boss John Street at the Karaka standardbred sale.Chuck in the second rowers which include in-form new-kids-on-the-block, former All Stars’ pacer Speech Is Silver, winner of 14 of his 18 starts, and Menangle visitor One Hell Of A Ride and the stage is set for a pearler.

“There’s plenty of high speed in the race and if they go silly it might suit a little swooper like the Hustler. If we drive for luck and things go his way he could earn a cheque.

Barnes says he’s glad the Hustler had a week off racing after his massive second in the Redcliffe Gold Cup (2613m), when he mounted a solo run three wide for the last 900 metres and went down by only a nose.

“He jarred up a little after the race because the track was pretty hard and he doesn’t have the greatest of legs.

“It took a while for the jar to come out of his legs so we just jogged him for a week, enough to keep him ticking over. But he’s had plenty of fast work in the last week and he’ll do a good job.”

Barnes says it’s impossible to predict how the race will be run and the favourite won’t have things his own way.

“Colt Thirty One has five and will have respect so he may find the top or the chair but I don’t believe he’s as good when they fire him out hard.

“It’s going to be an exciting race.”