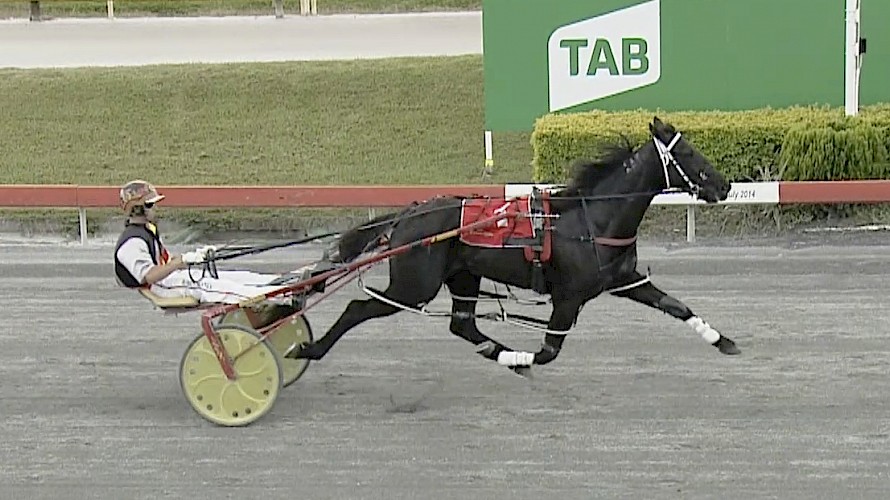 Northview Hustler is airborne at the finish of his Albion Park trial on Tuesday.

Al: Good night in the offing for Lincoln Farms with Hustler and Vasari both set to lead

Trainer Al Barnes is predicting a good night for Lincoln Farms on Saturday, confident of good results with both Northview Hustler and Vasari at Albion Park in Brisbane.

Barnes says he’s the most confident he’s been for a while with Vasari drawn the ace in a heat of the Young Drivers’ Championship at 8.45pm NZ time. And he believes Northview Hustler will stand up in his Queensland debut by playing catch-me-if-you can in the Flashing Red Handicap half an hour later. 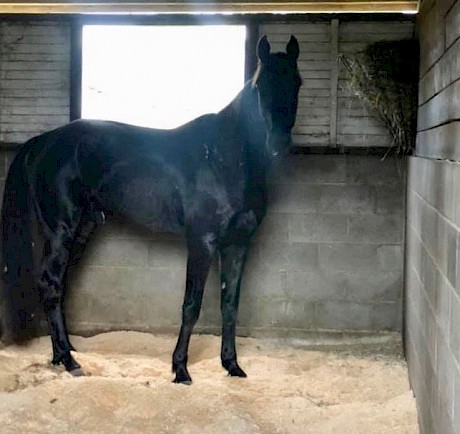 Northview Hustler … licking the bowl clean in his new home at Marburg.After Barnes trialled Hustler last Tuesday, and he won by 62 metres, he stipulated he’d only start the horse on Saturday night if he recovered well and ate up.

And today he says he’s been absolutely delighted with Hustler “who has been licking the bin clean every day.

“I can’t fault him. I normally feed 4kg of grain to my horses but I’ve been giving him 6kg, plus chaff and hay, and all he’s left is a handful of chaff scraps.

“I think we’ve got him spot on. Hayden jogged him in the cart this morning and said he felt bright.’’

Barnes believes Hustler can make the most of his front row draw on Saturday night by getting away fast, thanks to some expert tips from his regular driver in New Zealand, Andre Poutama.

Poutama, who is in Brisbane for a wedding on Saturday night, and drove a couple of “slow” horses for the stable at the races today, has given his new driver some good pointers, says Barnes. 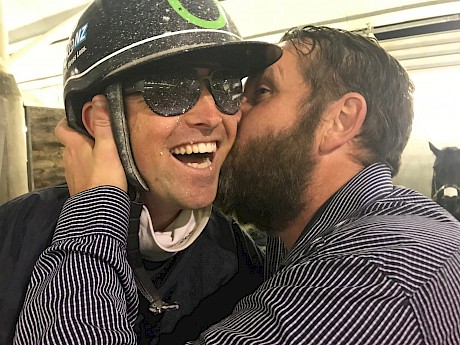 Andre Poutama, pictured getting a well done kiss from co-owner Carl Officer, is in Brisbane and has given a few pointers on Hustler and his quirks“Hayden stood him flat footed and let him amble away in the trial but we’ll keep him moving and on his toes on Saturday, and give him a smack on the bum.’’

A smart beginning is crucial for Hustler’s chances on Saturday in a field where he has strong opposition on both the 10 metre and 20 metre handicaps.

“Everyone over here knows he’s got ability and I’m hoping he’ll have respect and get the front.

“And if he’s running fast in front it’s going to make it awfully hard for the others to catch him.

“He’s got youth on his side whereas a lot of the rest are older. Hughie Green’s probably the class horse but he’s getting on and is coming back from injury so it’s a tough ask for him.’’

Many in the field will also struggle to see out the 2647 metres, says Barnes. “Mo Casino will but not if he’s pressured.’’

“I’m confident Hustler is going to do a good job over here.’’

A round from home last Friday and Vasari is bolting out of control, with the field strung out behind him.Very bullish on Vasari

Barnes says Sportsbet has Hustler a $3 favourite in the early market for the Flashing Red but punters can get as much as $7 for Vasari in the fourth race.

“I’m the most confident I’ve been for quite a while about a horse because he’s back to a mile and he’s drawn one.’’

Vasari will be driven by 18-year-old Taleah McMullen and Barnes says the lightly framed junior should suit the horse well.

Barnes says there won’t be any repeat of last Friday’s run by Vasari when he was out of control in the lead and stopped to sixth over 2138 metres.

The run was in complete contrast to his debut Queensland run when Barnes took off his hood and the horse never got warm at the back of the field.

“He only got all fired up like that because we tried to wake him up by giving him a smack on the bum in his preliminary and out of the gate.

“But we know now how to switch him on and off. He’ll wear a pulling bit on Saturday night, as well as the hood, and he’ll be controllable.

Barnes is hoping he can start off the night on a good note with former Lincoln Farms’ horse Lincoln Road in the third race at 8.15pm.

“He’s drawn eight but it’s only an eight horse field and I reckon he can knock them off.’’