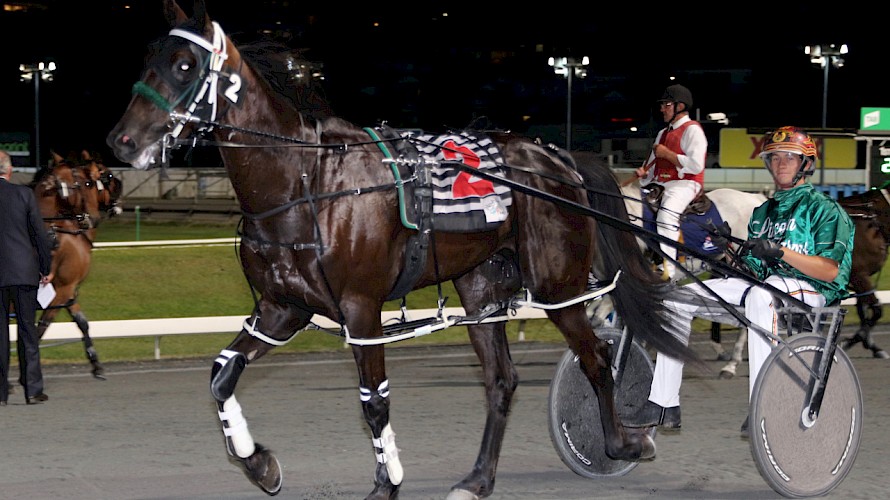 Northview Hustler (Hayden Barnes) is as good as trainer Al Barnes has had him. PHOTO: Dan Costello.

Northview Hustler will need luck from the outside of the gate at Albion Park tonight but he’s in such good form trainer Al Barnes says he won’t finish far away.

The Hustler, fresh from an all-the-way win in a career best 1:52.5, meets a slightly easier line-up tonight but under the preferential draw system, as the highest rated horse, gets the worst draw.

And with two horses he knows the Hustler can’t cross, including pole runner Mattgregor, Barnes says his son Hayden will have no option but to ease back at the start.

“He can’t blast forward over 2138 metres. Mattgregor’s a really nice horse, is very good in front, and can reel off a quick half.

“Besides, with the speed the Hustler’s got, having to come from last isn’t a big disadvantage in a small field - he’s proven that time and time again.

“It’s tougher coming from last but he tries and I don’t think he’ll be far away. If there’s a chink in anyone’s armour he’ll be the one closing late.”

Barnes reports the Hustler has had another good week since his big win last Saturday night when he ran a closing half in 54.8 and quarter in 27 to beat Major Cam, Chevron’s Reward and Fame Assured, all rivals again tonight.

“He’s doing well and looks a treat - he’s solid and black as black, the best we’ve ever had him.

“He just needs a bit of luck.”

The Hustler meets a new rival in the form of ex-Kiwi Lets Katchmeifucan, who has been turned into a tiger since joining Craig Cross, with two seconds and five straight wins, the first of those at Menangle in 1:51.1.