Only the barest of noses spoiled a first-up double for Lincoln Farms’ newcomers to Queensland tonight when Larry Lincoln won and Man Of Action was pipped on the post at Albion Park.

Trainer Al Barnes’ pre-race analysis of what to expect from the pair played out to the letter as Larry Lincoln and Hayden Barnes brained their opposition then Man Of Action and brother Brendan had their race won until the very last stride.

Larry Lincoln strides home to a comfortable win.“Larry was awesome,” said Al Barnes after the little speedster spent much of the race three wide, then parked, yet still got home comfortably by 2.4 metres.

“It was a really good effort as he pulled up really big so there’s plenty of improvement in him.

“We didn’t know how much work he could do because in New Zealand he wasn’t racing tough but he did plenty tonight and won well.

“He had fixed plugs in too so there’s more to come there as well.”

While Larry Lincoln goes up four points in the ratings, with a five point three-year-old concession he will get back into the same grade again next week, says Barnes. 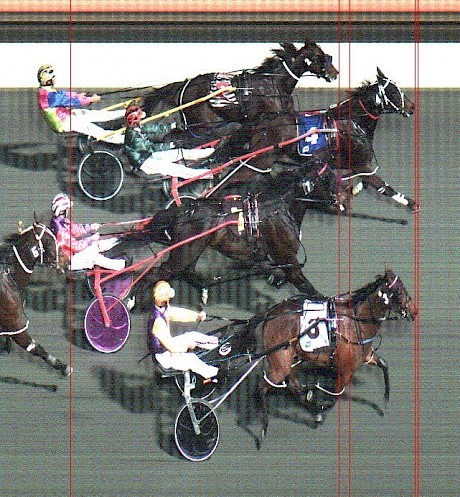 There’s only a pencil line between winner Jive, lower, and Man Of Action.So too will Man Of Action who showed terrific gate speed to forge to an early lead, running his first quarter in a rarely beaten 26.8 for that grade.

Man Of Action looked to have the field covered early in the run home but Brendan Barnes reported he waited for them a bit.

“And he didn’t see that one (Jive) coming because it sprinted so quickly.

“Brendan says they won’t be able to sit outside him and beat him because he’ll fight all day but it’s the ones who ping late that can catch him.

“But after that fast first quarter he still ran home in 56.4 and 28.5. And we know he’ll get better as he’s still a bit tubby and he has a few little problems in the back end that we need too fix.”