Al on today’s demolition: What will Trojan do when he’s fully fit and stops waiting for them?

Trainer Al Barnes can’t wait to see what Trojan Banner can do in another month when he’s fully fit after the horse smashed his rivals again at Albion Park this afternoon.

For the second week on end the showy black made his rivals look second rate, as he careered away to win by nine metres, making light of Barnes’ fears that he might face too hard a task from the inside of the second row.

But while the colt clocked a terrific mile rate of 1:56.2 for the 2138 metres, it was more the way he was puffing afterwards that makes Barnes think he is on to a real winner.

“He had a really good blow afterwards,’’ says Barnes. “He had a very slow recovery rate - it took him 45 minutes - so we’ve still got a lot up our sleeve.

“It was a very good effort to do what he did on his fitness level.

“I’m looking forward to a month down the track when he’s really fit and fully acclimatised. He’s still struggling a bit with the heat. Normally in March it dies down to 29 to 30 but it’s been mid 30s and higher this week.’’

Barnes liked the way Trojan Banner charged off the float when he got home to Marburg, 55km from Brisbane.

They’re coming home like Brown’s cows as Hayden Barnes puts his foot down on Trojan Banner at Albion Park today.“He was full of beans and wanted to go again. And he’s a really good eater.’’

Barnes says his training style is not to work his horses as hard as many other trainers.

“It might take me a couple of weeks more to get them fully fit but when they get there they’re rock hard.’’

With his good stamina, and a turn of foot which surprised him again today, Barnes says Trojan Banner is the ideal type to succeed in Queensland.

“They normally go pretty hard here and you need a horse to be up and travelling who likes to run at speed.’’

The solid tempo today certainly suited the horse as Barnes’ son Hayden expertly manoeuvred Trojan Banner off the fence and secured a one out and two back trail.

“We didn’t expect him to be that close. Being midfield and not right out the back made it much easier for the horse.

“It was a good, patient drive by Hayden and when he let him loose at the 600 we were pretty impressed with his speed. He showed a good turn of foot in winning his trial but we didn’t think he’d round them up that quickly.’’

Trojan Banner screamed round his rivals and streaked clear in the run home, turning the finish into a procession.

Trojan Banner has his rivals well covered, cruising to a 1:56.2 mile rate for the 2138 metres.Time for pull down blinds

“He had plenty left too. If something had gone with him he’d have gone even faster. He actually switched off a bit so we’ll put pull down blinds on him now. We don’t want him getting into the habit of waiting for them.

“We want him to be running it right out to the line, or you run the risk that something will nut him late, so we’ll teach him that now.’’

Despite cruising at the finish, Trojan Banner’s time compared very favourably with the horse Hayden Barnes drove to win the next race, over the same trip.

Zaras Delight clocked a mile rate of 1:55 but it was in a c6 to c9 event “against good quality horses,” the winner recording her 20th win.

“He ran really good time. In any state over 2100 metres that’s a good effort. If you’ve got a horse who can do that you’re going to win plenty of races.’’

“We have consistent weekly racing here and we’ll try to get him used to that. Colts like routine and it will make our job training him easier.’’

With today’s A$3394 stake, Trojan Banner’s Australian bank account now stands at A$6788. 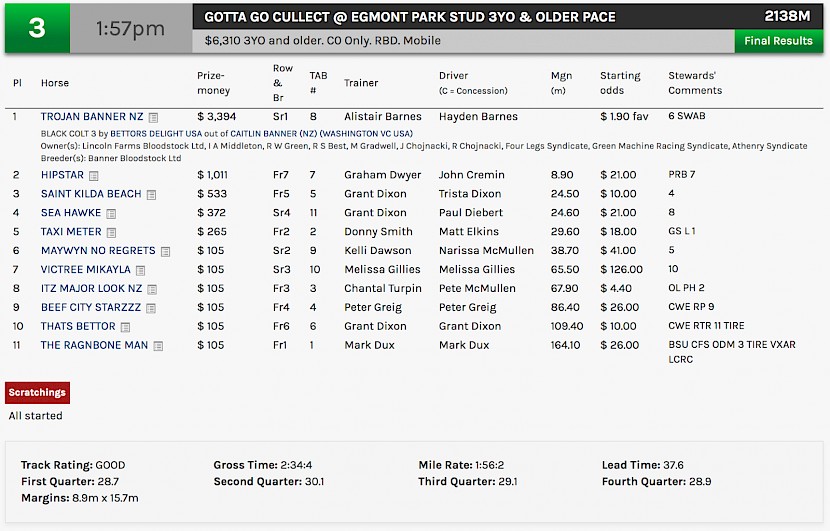