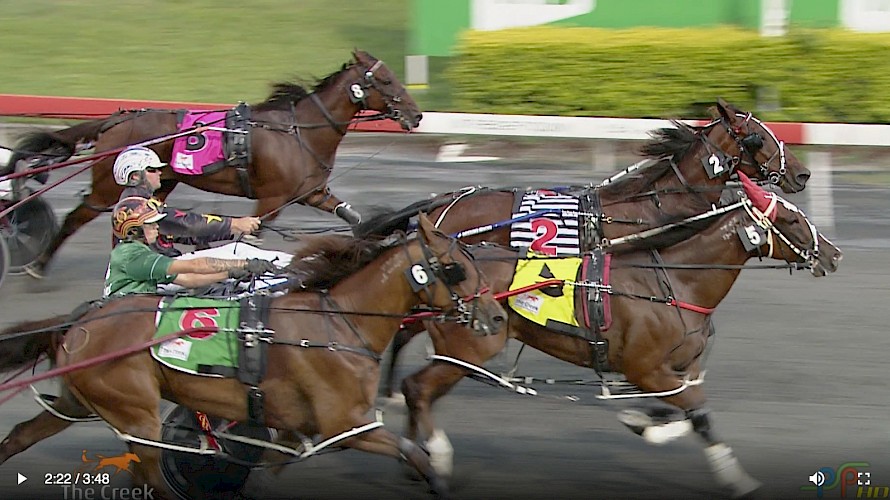 Al right on the money as Larry Lincoln pulls off $12.80 upset at Albion Park

If trainer Al Barnes’ tip that Larry Lincoln was a big winning chance tonight wasn’t enough, his Facebook post just an hour before the race showed how confident he was.

Barnes told www.lincolnfarms.co.nz in his preview that Larry was “flying, busting to win a race and I reckon this is his chance.”

And on his Facebook page Barnes posted a picture of the horse, sporting his big white blaze, letting people know he was trying to set up a syndicate to buy him from Lincoln Farms.

Barnes was very bullish before the race given how unlucky Larry had been in his recent racing and predicted the better quality field, and faster tempo, would actually help him.

And so it proved when, despite being sent out only fifth favourite at $12.80, the little warrior was saved for one run and used his high speed to down the hot favourite Our Madiba by a nose.

“I’m rapt,” Barnes said. “We love that little horse, he’s such a gentleman. I love him that much I’m trying to set up a syndicate to buy him.

“He’s sound and honest and he’ll only get better when they go quicker.” 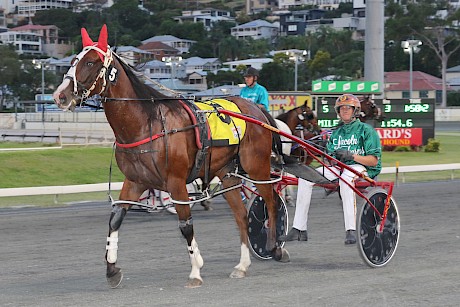 Hayden Barnes brings back Larry Lincoln after his terrific win tonight. PHOTO: Dan Costello.But Barnes admitted while Larry ranged up powerfully three wide to take a narrow lead on straightening for home, he wasn’t confident that he’d hang on.

“Hayden was first to pull at the 600 and I thought he’d gone too early and would run out of puff. But Larry kept trying and dug in deep.

“Hayden was rapt that he finally got a decent trip and he drove him a treat. He went straight back on to a helmet, instead of going forward.

“Larry’s been desperately unlucky in his last few runs but tonight he got a good trip in a small field, and he must have run a low 26 in that last quarter.”

It was Larry Lincoln’s sixth win for Lincoln Farms’ owners John and Lynne Street since they sent the horse to Queensland and his A$7818 purse tonight took his earnings in the state to A$33,964.

Northview Hustler couldn’t make it back-to-back wins later in the night but had an excuse for finishing at the rear.

Barnes said his son Hayden reported the horse was bolting turning for home and he thought he was going to run straight past his rivals.

“But he got on himself and gave his knee a good whack - he was probably just going too quick for himself.

“Hayden did the right thing and eased him down.”

Barnes said foot trouble was often the cause of horses getting on a knee and the Hustler was continually worried by corns and infections.

“I’ll get him right and he’ll be back fine in two weeks. Hayden said he actually felt really good in the warm-up, as good as he’s ever been.”