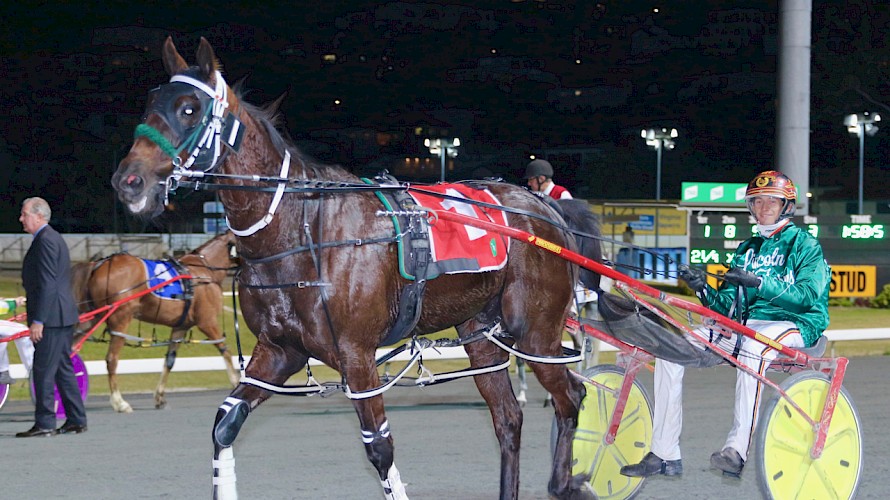 Al: They’ll have to scoot to get past the Hustler who now has a real spring in his step

With his confidence at an all time high, Northview Hustler is the one to beat at Albion Park on Saturday night.

The Hustler’s luck has really turned, landing the pole position for the second week on end, and he will start a solid second favourite in the third race behind Ashley Locaz.

Trainer All Barnes says he can’t recall seeing another horse so switched on by a win, the Hustler having a real spring in his step this week after leading all the way last Saturday night.

“Having that kill has really helped him. He pulled up really well and has been really sharp this week, working stronger.”

Barnes says he is confident the Hustler can run in the top two again, stepping up from 1660 metres to his more preferred 2138 metres.

“Now that he’s at the top of his game, he doesn’t need to go slow like last week to win.

“He’s definitely the one to catch. They’ll have to park outside us to beat us.”

Barnes accepts former All Stars’ runner Ashley Locaz, drawn awkwardly in five, will be improved for his run last week, when he faced the breeze and, under pressure, battled into third.

“He has to step up to 2138 metres on Saturday. That run last week will help him but it will help us more. Hustler had a two week break before his last run and we know we have to race him every week to see the best of him.”

Barnes says the field is no stronger than last week, and is missing the speedy Bright Energy.

“Something might have a look at us for 100 or 200 metres but I can’t see too much pressure being put on him.

“They look ready to go but I’ll probably give them a quiet trial next week to have a look at the track.”