Trainer Al Barnes is confident of a top three finish from Bondi Shake despite his drawing the second line at Albion Park on Tuesday.

Bondi Shake starts from two on the second row in the third race but Barnes is hoping he gets a good run through because he follows out a good gate horse in Kotare Elite.

“There’s a bit of speed out wide with the favourite coming from six but he should settle close to the firing line.

“He’s one of the better ones in the race and I’d be disappointed if he didn’t finish in the top three.”

Likely favourite Scotch En Ice, trained by 79-year-old veteran Vic Frost, has been out of the money only twice in his eight starts but Bondi Shake is also building a very consistent record. 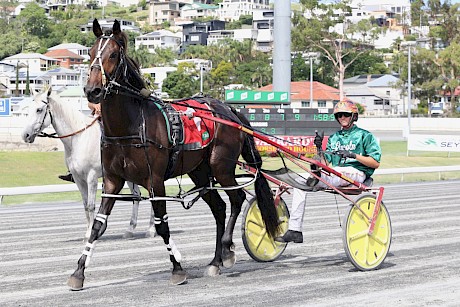 Bondi Shake … two wins and three seconds from six starts in Brisbane. PHOTO: Dan Costello.In six Queensland starts he has racked up two wins, three seconds and a fourth, and is improving all the time, says Barnes.

“I’m really happy with him. He’s proving to be a nice horse, better than I thought when he first arrived. He’s developing more strength.”

Barnes is hoping the tempo of the race on Tuesday is more solid than last time given the three-year-old is coming back from 2138 metres to 1660 metres.

Leader and favourite Moresco was gifted the race last week when he strolled along with quarters of 30.3, 30.2 and 29.7, leaving the race only a sprint home. While Bondi Shake closed well late from the trail, he missed by half a neck.

“When they sprinted at the top of the lane he was a bit green and gangly. Hayden said for the first 50 metres of the straight his legs were going everywhere and he didn’t really put it together until closer to the line.

“If they’d got rolling a bit earlier it would have suited him better. The 27.6 last quarter was just a bit too sharp for him.”