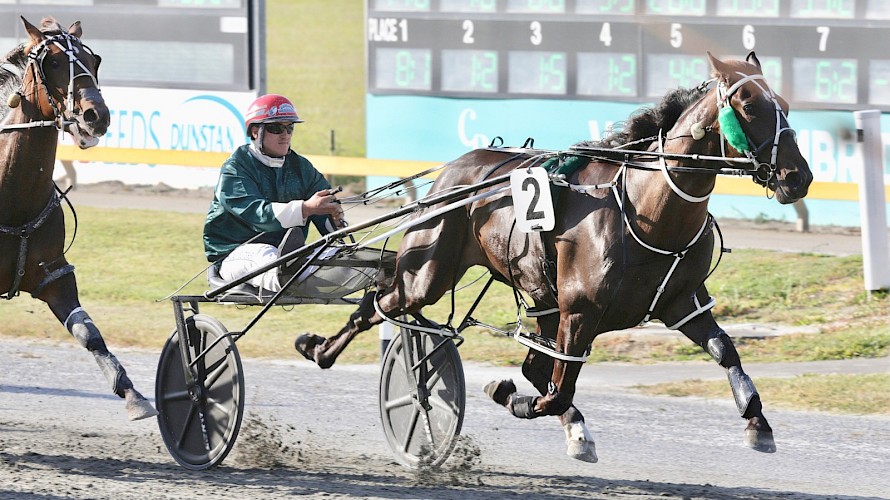 Man Of Action is not even out of third gear for Zachary Butcher at Cambridge last night. PHOTO: Trish Dunell.

Man Of Action will get his chance against better opposition at Auckland next Friday after he scored easily in little more than a training exercise at Cambridge last night.

Man Of Action, whose half brother Make Way races at Menangle tonight, always had the race in safe keeping, strolling to an early lead and cruising home in a sedate mile of 1:59.1.

Driver Zachary Butcher had only to reel off closing sectionals of 59.5 and 28.1 to win by three-quarters of a length, runner-up Delightful Catherine getting so close only because he was sleep-walking.

“He did what we expected and did it well,” said trainer Ray Green. “It was just a glorified Saturday workout for him.

“Zac said he only did what he had to. He pulled the plugs and had to shake him up the last bit because they were all coming. But he said he was just loafing and was never going to get beaten.

“We’ll back him up at Auckland next week and hope he keeps improving but he should go well. He nearly won there last prep and is far stronger now.”

Last night’s win took Man Of Action’s record to one win and three placings from seven starts, his $5130 stake boosting his bankroll to $11,295 for one of Lincoln Farms’ largest partnerships.

The group includes many of the Christchurch owners who enjoyed success with Lincoln Farms’ Beaudiene Western, who was sold for big money to Perth in late 2018 - Steve Beckett, Kevin Bell, Michael Brerton, Marilyn Brown, Brian Rabbitt and his sister Margaret and the 23-strong Green Machine Syndicate, all Marist rugby mates.

Also joining Lincoln Farms’ John and Lynne Street among the partners are the Chissos and Wack syndicate comprising Mangawhai brothers Duncan, John and Dave Chisholm and their golfing mate Warwick Orr, all of whom share in the fun of racing Man Of Action’s half brother Make Way.

Man Of Action, by champion stallion Bettor’s Delight, is an all Woodlands Stud product being the fifth foal of it’s successful broodmare Grace Way.