Lincoln Hanover is poised to end a string of frustrating placings spanning nine months when he lines up at Waipukurau on Sunday.

The Showcasing four-year-old has racked up four seconds and two thirds in his eight-start career but trainer Lisa Latta says all the signs are there that he is on the verge of breaking his duck.

When Lincoln Hanover resumed from a near six-month spell at Otaki on November 7, it was on the back of only one jumpout and, despite being collared early in the run home, he fought on bravely, conceding only in the last 100 metres.

But it wasn’t so much his fight, that saw him finish only one and a quarter lengths from winner Super Girl, that impressed Latta, rather the way he conducted himself before the race.

“He used to get really wound up before his races but he wasn’t at Otaki. He’s much more settled this time in and he’s trained on really well.”

Latta says the Lincoln Hanover racegoers will see on Sunday is a far better model than last season - all over stronger - and after Waipukurau she will step him up over more ground.

Dam Princess Lincoln won four races for Latta and Lincoln Farms, scoring a wet track 1200 metre hat-trick in the winter of 2012, and just one win over 1400 metres.

Drawn the ace and with his ability to lead or race on the pace, Lincoln Hanover will give his rivals plenty to think about on Sunday. 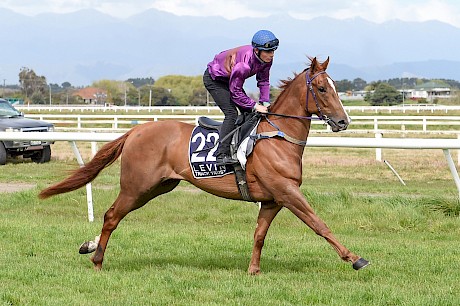 Ajay Lincoln finally gets a middle distance to show what he’s got. PHOTO: Royden Williams.None of Lincoln Farms’ other three runners on the day look winning material although the possible surprise packet is Ajay Lincoln in the opening race.

With just one placing from 10 starts, it would be a brave person to say his lodgings at Latta’s stables are safe.

But this will be the first time he has lined up over 2200 metres, a distance which Hannam has believed for a long time will reveal a different horse.

Even though Ajay Lincoln got 1800 metres at New Plymouth last time, and was never in the call, Latta says he was beaten by a muddling pace and on-speed bias.

“He’s also very lazy and one-paced and it’s possible the apprentice (Kozzi Asano) might not have been strong enough to make him go.”

Regular rider Hannam gets back on board on Sunday and Latta says “he’ll be positive from the gates and get him into the race to give him every chance to step up and show something.”

“He’s been very slow maturing but his work this time on better tracks has been a lot better.”

Hannam reported the horse to be very one paced in his latest trial at Foxton when he had to be pushed out to run third.

“But he has a super attitude and I think he’ll be better when he gets up over ground.”

Fifth race runner Lincoln’s Gal blew out when resuming at Awapuni and Latta expects she’ll need another run, and a longer trip, before showing her best.

“It’s also quite a strong field.”

Rotorua and Doomben outlook: One Platinum needs rain on the day, the other wants it to end

“I’m not too concerned by the 14 draw as late in the day this could be the place to be. She’s stepping back up to a mile, which is a distance she has won over, and she’s won at Wanganui. We will go forward and put her in the race and on her work I am expecting her to bounce back to form.”