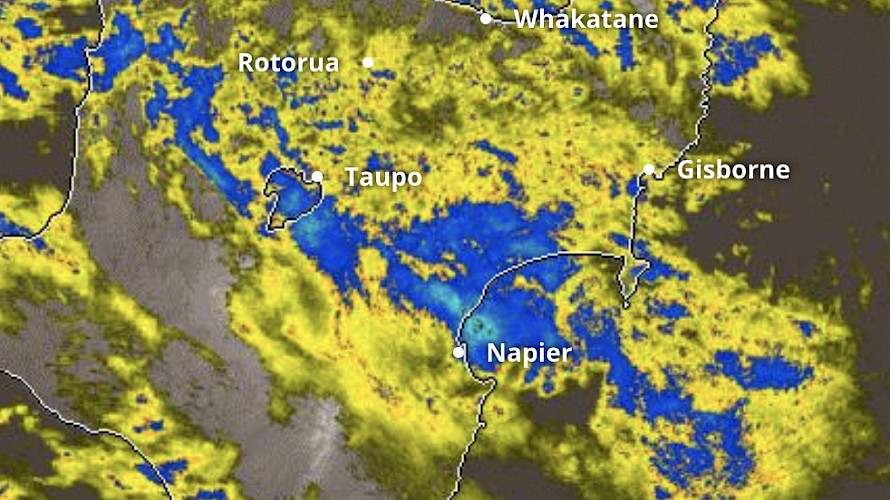 The weather map shows Hastings taking the brunt of the big wet with 25mm of rain forecast to fall there today. PHOTO: Metservice.

Trainer Lisa Latta knows she’s asking a lot of Platinum Machine in taking on some of the country’s best fillies in Saturday’s $80,000 Gold Trail Stakes but with the amount of rain set to strike Hastings she believes she’s better than a $61 chance.

Facing the likes of unbeaten Te Akau filly Imperatriz ($1.90) and two-year-old of the year candidate Bonny Lass ($7.50), the bookies have Platinum Machine one of the outsiders and will even give you $10 for a place. 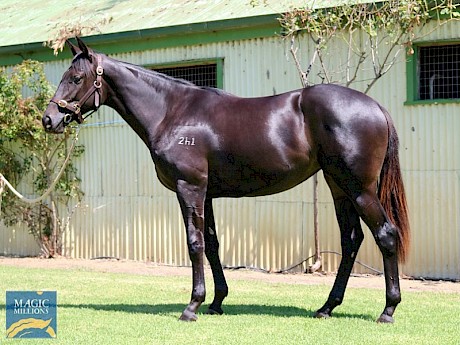 Platinum Machine cost A$32,000 as a yearling.But Latta is hoping the 25mm of rain forecast today will disadvantage a lot of the better fillies and bring her filly more into contention.

“We had her entered for a maiden three-year-old race at Otaki today but unfortunately they had that many withdrawals because it is so wet down here that the race was abandoned.

“So we have decided to have a go at Hastings. It’s a big ask but with the rain coming in it should bring her into it a lot more. Her work has been great going into this.

“In a field like this you’d just be absolutely stoked if you could run third or fourth and get some black type.

“And we need to kick her off as she is nominated for the 1000 Guineas.”

The $300,000 One Thousand Guineas (1600m) is carded for Riccarton in just two months, November 13, and is one of the better fillies’ races this season that Latta believes Platinum Machine is up to contesting.

Latta first labelled the Lincoln Farms and Neville McAlister-owned filly as one to paste in the little black book in May before she ran a debut fourth at Awapuni on a slow track, blocked at a vital stage 250 metres out.

And Platinum Machine ran right up to that tag when a close fifth in the late season two-year-old feature, the Castletown Stakes at Wanganui on a slow 8 track on June 5, only a head and half a neck from third.

Platinum Machine is fifth, but only a head and half a neck from third, in the Castletown Stakes at Wanganui won by Danger Strykes.By the young Irish stallion Free Eagle, a son of staying sire High Chaparral, the filly cost A$32,000 at the 2020 Adelaide yearling sale, her dam Cruz By a winner of four races between 1300 metres and 1800 metres.

“She’s bred to be a middle distance three-year-old and is a lovely filly with that bit of attitude that the good fillies have,” Latta said.

Platinum Machine has trialled twice this preparation, the first at Foxton on September 2 when she flew the gates but quickly dropped out and lost contact with the field before making ground to beat one home.

“But she really bounced back at the Levin jumpouts last Wednesday when Lisa Allpress rode her and was very impressed.”

The track was very testing that day and Platinum Machine won the 1000 metre heat by a length in 66.96.

Allpress takes the ride again on Saturday when Platinum Machine jumps from gate 12. 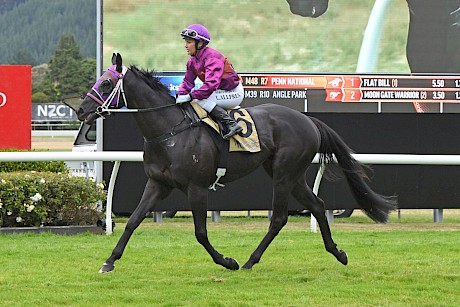 Latta’s best chance for Lincoln Farms on Saturday should be another Allpress mount, Lincoln’s Kruz ($14, $4.20) in the third race.

“I would expect him to be competitive first-up in this field. He’s gone very well in both his trials.”

Lincoln’s Kruz won his frist trial, over 1000 metres on a heavy 11 Foxton on August 10, before running third to House Of Cartier and Llanacord there on September 2 when the going was a slow 9.

“He’s come through his two trials really well and I’m very happy with him. His coat is still not quite there, there is a bit of improvement in him, but he has performed well at Hastings before and, while rain is forecast, his race is early in the day so he should get away with it.

“When the ballots come out hopefully he will come in a couple of places and end up drawing around eight.” 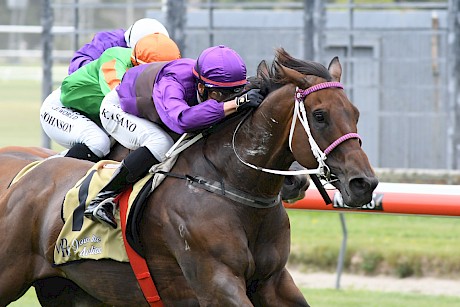 Lincoln Raider has an explosive finish and has been turning in some good gallops at Awapuni. PHOTO: Race Images.Lincoln Raider forward

Latta lines up capable gallopers Lincoln Raider ($31, $7) and Lincoln Hills ($31, $7) in the eighth race, Raider the most forward.

“The 1200 metres is a bit short of his best but we have mapped out a bit of a programme for him and he really needs to kick off here,” says Latta.

“He certainly is a much stronger horse this time in and has been really sound which is good as we have got some good work into him.

“It isn’t going to be a bottomless wet track like we get in other places so I think we need to let him take his place.

“He has a fair bit of condition on and I have elected to leave Jonathan Riddell on, as with his barrier manners I want a strong rider to get him out of the gates and give him a chance to be in it.”

Latta is hoping that from gate two Lincoln Raider can get away on terms and settle midfield.

“His work has been really good, with his last trial at Foxton being a lot better than his first-up run. And he has had a few really decent hitouts on the No.1 grass/course proper at Awapuni since.

“His fitness should have him not far off and you would expect him to be doing his best work late.”

Lincoln Hills has a tricky 14 draw but Latta hopes he will come in a couple for rider Sam Collett with scratchings.

“I elected to run him over 1200 metres rather than 1400 metres because the 1400 is the last race and will be more testing after all the rain.

“We know he does handle some wet tracks and with his gate speed hopefully he can slide forward and get up third or fourth to give him every chance.”

Latta doesn’t expect Lincoln Star ($21, $6) to have any problem getting in off the ballot in the last race and says while the 1400 metres will be too sharp for him, it will help fit him for a mile on the track two weeks later.

“It’s quite a strong field but as long as he is doing his best work late it should have him spot on for the next start. He trialled up enormous in his last trial at Foxton, he really tried hard.”