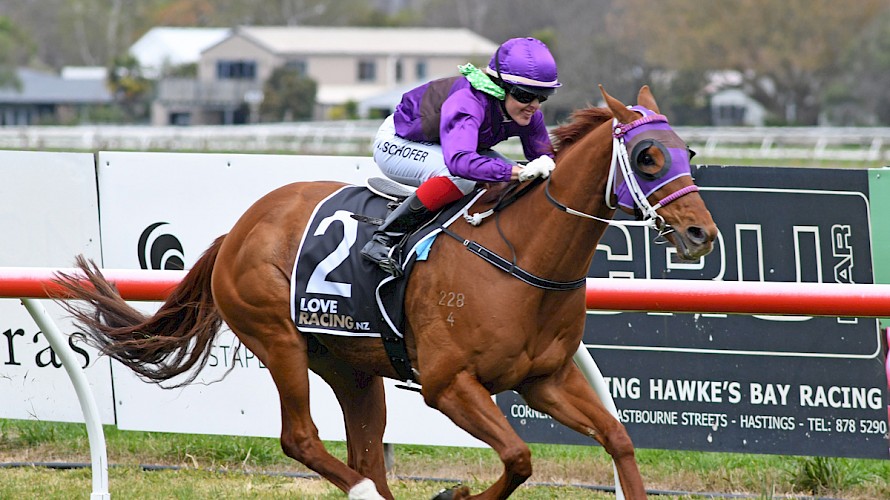 Lincoln Hills has won three races at Awapuni and has a lot in his favour there on Saturday. PHOTO: Peter Rubery/Race Images.

Bookies have Lincoln Hills only the $7.50 fourth favourite for the second race at Awapuni on Saturday but he has everything in his favour to upset.

Lincoln Farms’ trainer Lisa Latta has only one query about the All Too Hard six-year-old and that’s the track condition which is expected to improve from this morning’s dead 5 to a good 3.

But to his credit he has scored three wins on dead 4 ground and Latta says running early in the day, before the track dries out too much, will help him.

Lincoln Hills showed Latta he was right up to the mark with a good gallop on Tuesday, paired with stablemate Platinum Rapper he clocked a solid 49.4 and 36.3 on a good plough. “He should get a nice trip just behind the speed and I expect him to be a big chance.”

Latta is on an exploratory exercise with Platinum Petals in the third race, tackling good footing after her excellent debut second on slow 9 ground.

“We’re hoping she’ll handle it but we simply don’t know as all her jumpouts and trials were on tracks with a bit of rain.”

Latta knows it’s a big ask tackling the older horses with her Deep Field filly, especially with plenty of form in the race, but says it will tell her what path to follow after Saturday.

“She’s looking really good at the moment and her work has been up to the mark. She’s been much better at home since we put a tongue tie on her.”

Platinum Petals, who gets a 2kg claim with Hazel Schofer, will eventually need a hood, says Latta, who wants to keep that move up her sleeve.

On debut at Otaki 15 days ago the filly sat on the pace throughout and kicked on bravely to run three lengths behind Montre Moi, photo-finishing two others in a close fight for second.