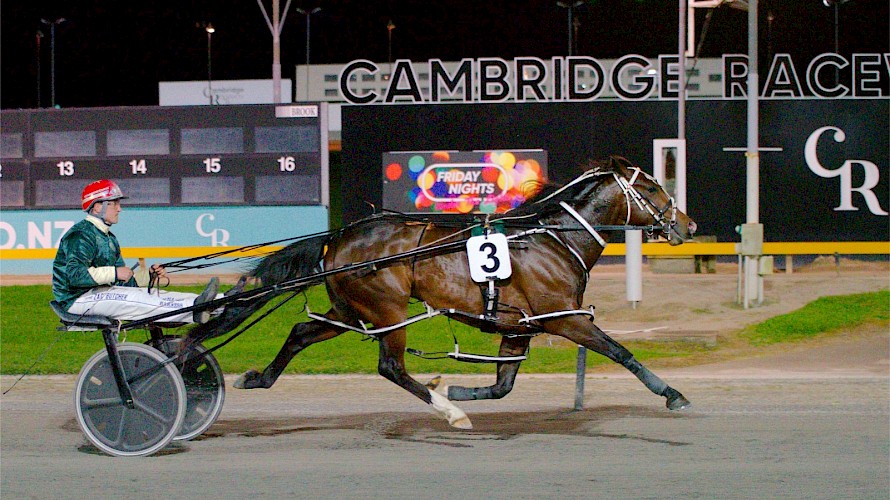 Larry Lincoln scores on debut at Cambridge. He returns there on Wednesday night and gets the same handy draw.

With a run under his belt, expect the speedy pacer Larry Lincoln to be hard to beat at Cambridge on Wednesday night.

Lincoln Farms’ three-year-old meets a weaker field than the one he faced last week at Auckland when having his first race for nearly eight months.

And he has drawn perfectly in three, meaning new driver David Butcher should have no trouble finding the early lead.

Zachary Butcher, who is committed to his own horse Whisky Neat on Wednesday, never had to buzz up Larry Lincoln at the start at Alexandra Park, crossing untested from wide on the gate to lead, before taking a trail behind stablemate Man Of Action.

The Sweet Lou colt ran out of condition round the home bend after which Butcher didn’t push him.

“You’d expect him to be right there this time. He’s a very capable horse who has quite a bit of speed.

“He doesn’t need to be gassed out of the gate - he probably burned too much petrol last time - and if he can find a nice trip, he’ll be very potent with his speed.

“They won’t go as fast as at Auckland (stablemate American Dealer clocked 2:43.4 for the 2200 metres) and of course he turned his debut at Cambridge into a demolition job.”

Larry Lincoln was sore and was spelled immediately afterwards, Green giving him plenty of time to get over his soft bones and growing pains.

While Apieceoflou (race three) didn’t flatter on debut at Auckland, when he was slow away then broke in the run home, Green is predicting a much better showing this time.

“He just didn’t know what to do when they kicked at Auckland last week but he’s trained on well since then and I think he’ll go well.”

David Butcher takes over the reins from Andrew Drake.