On a night when Lincoln Farms’ runners excelled at Alexandra Park, a race which it didn’t win, the Sires’ Stakes heat, left connections most excited about what’s to come.

A spectacular win by Copy That and a long odds upset by Tommy Lincoln headlined the night but it was the efforts of American Dealer and Captain Nemo which promised so much.

With races worth more than half a million dollars coming up, trainer Ray Green was thrilled to see little prizefighter American Dealer run the country’s best three-year-old to a head.

“For a fleeting second I thought we were going to nail Krug, but he was just a little too good,” said Green.

American Dealer, who burned from the pole to hold the lead, before succumbing to Krug 700 metres from home, rallied strongly up the lane for David Butcher, his challenge coming up just short in a blistering 1700 metres run at a mile rate of 1:54.4.

Green is now eyeing up two two-year-old features that were postponed last season before tackling the three-year-old Sires Stakes races.

“The good thing about him is he has such a great constitution and can cop the racing. Some can’t cope and after a while start waining.

“But he’s out there now galloping round his paddock and bouncing around.”

Green’s confidence in Captain Nemo was only strengthened when he fought strongly in the run home for third, albeit three lengths from the top pair.

Also being aimed at the same features, Green says the Captaintreacherous colt is still on the up.

“I suspect come derby time we’ll see him at his best. The extra distance will be right up his alley.

“I’ve always liked him. He’s a lovely, big horse who’s probably used a lot of energy growing and filling out. He’s never been as strong as he could have been but he’s toughening up now.” 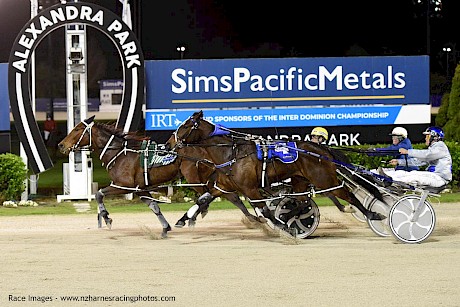 Forced to be driven quietly from the inside of the second row, Tommy Lincoln travelled well three back on the pegs before unleashing strongly in the run home.

“He won well. I liked the way he was travelling into the corner, thought he’d be right in it, and the gap came at the right time.”

Tommy Lincoln reeled in Major Jellis and Magilligan Point to score by three-quarters of a length in a very fast 2:38.4 for the 2200 metres.

“He’s a nice solid horse who’ll end up in open class but I doubt he’ll be super competitive when he gets there.

“Last night proved that, at the higher level, he can’t be driven like a toe rag all the time.”