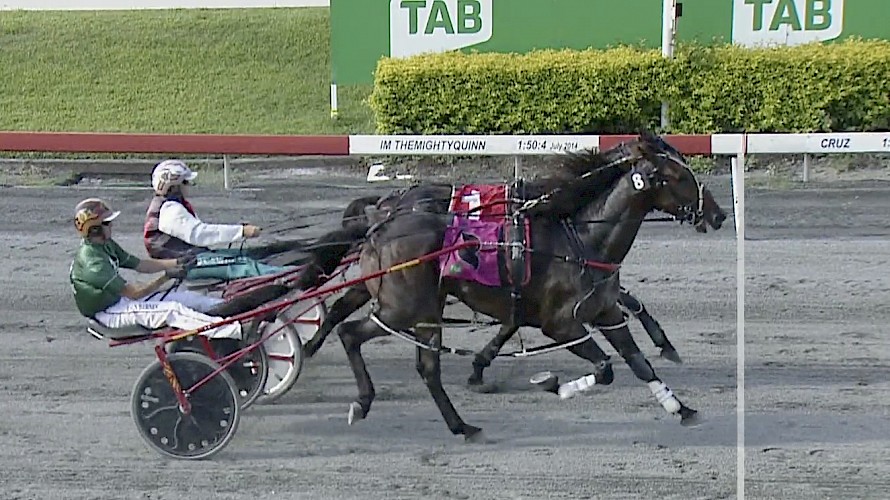 Bondi Shake gets a nose decision over Coppice, obscured, at Albion Park today.

Bondi Shake extended a good run for trainer Al Barnes and Lincoln Farms when he got up in the last stride to win at Albion Park in Brisbane today.

Everything went to script for Bondi Shake today with Hayden Barnes able to hold the back of pole runner Coppice who was driven up to keep the front into the first turn.

And when Coppice went for the doctor turning for home Bondi Shake was the only one able to stay with him, coming off his back into the stretch and finishing powerfully to score by a nose.

Al Barnes has no reservations about tackling a $A14,000 race on Saturday night, given how well the horse raced when last backed up so quickly.

“He went super last time we did this, and went better the second time he raced. He’s tough and loves it. We don’t work him hard at home. 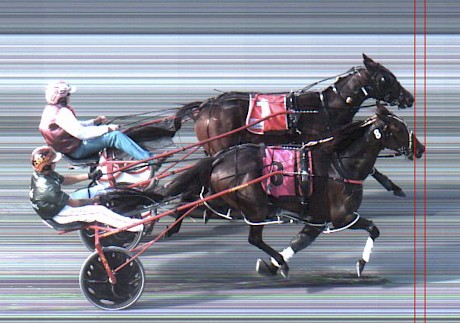 It’s close but Bondi Shake has a clear margin.“He’s in a tough race on Saturday night but drawn four, he’ll sit on the speed.”

Barnes said interest had been shown in buying the horse who he believed had the ability to win plenty more in the next few seasons.

“He’s missed a cheque only once in 13 starts with three wins, five seconds, three fourths and a fifth, and he’s still only a rating 52.

“We know he doesn’t ping, he needs to get out and unwind, but he’s improving all the time.”

Barnes was also pleased with how Man Of Action trialled today, trailing the leader over 1660 metres, sprinting clear at the top of the straight and just run down in the last couple of strides by Jive in a 1:56 mile rate.

“He was beaten only a head and he was a run short.”

Man Of Action has returned from a break in great order, says Barnes.

“He was just tired, racing on tired legs, but he looks big and solid again.

“He may race next week.”