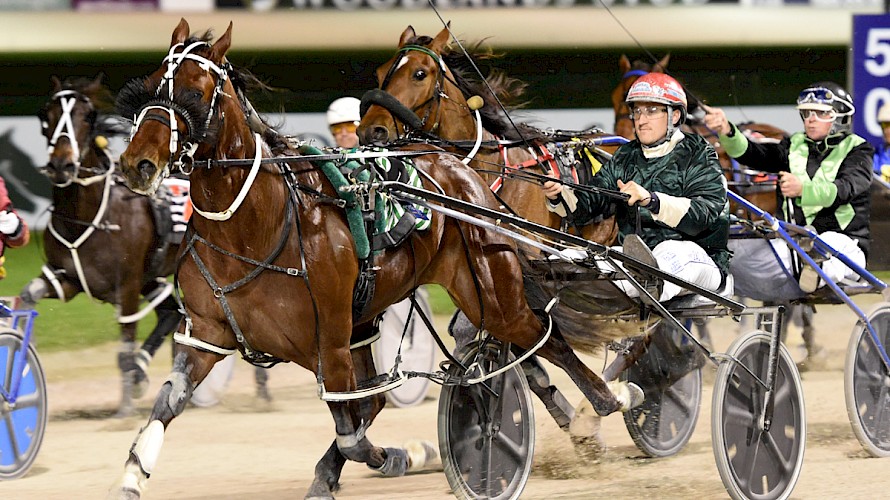 Cop that! Copy That overcomes mistakes with blistering display of speed

Copy That stepped out of the shadow of his much vaunted stablemate Line Up when he overcame three mistakes during the running to score a brilliant win at Auckland on Friday night.

Trainer Ray Green and driver Zachary Butcher were left wondering just how good the three-year-old might be with some tweaks to his gear after he came from a seemingly impossible third last on the home turn, and swept past his rivals with a sensational burst of speed.

Green was taken aback soon after the start when Copy That galloped after 200 metres, regaining his gait quickly before breaking again 100 metres later.

And he, like all his supporters who backed him down to fixed odds favourite, would have gladly cashed in their tickets when he was buried four deep a round from home.

Things started to look a little better when Butcher was able to extricate him off the fence halfway down the back straight and get onto the back of Magilligan Point in the three wide train.

But just as he was about to be sucked into the race, Copy That galloped for a few strides yet again, taking him back to the tailenders with 300 metres to run.

Incredibly, Butcher was able to get Copy That organised again and when he hooked him out passing the 200 metre mark he flew, dashing past his rivals to win, going away, by one and a half lengths.

“I knew as soon as I straightened that he’d be right in it,” said Butcher. “He’s real quick. He ran almost the same time as Line Up (third in 2:41.4) who had the one-one and this guy was three wide and doing things wrong.

“And what I really liked about him was he was going as well at the line as he was at the top of the straight. The way he got to the line was pretty impressive.”

Butcher says he was amazed at how quickly Copy That was able to regain his gait each time he paced roughly, when most horses would have exploded into a full blown gallop.

“That’s because he’s so well gaited. The only time I had trouble was on the bends when I had to nurse him. He gets in on the pole and gets his head in. In the straight he paced perfectly.”

Green believes he can fix the problem with a few minor tweaks, primarily by reverting to using a pricker on his pole to keep his head straight.

“I reckon he’s clipping a knee,” said Green a suspicion confirmed by brush marks on his knee boot.

Green is excited at the thought of getting Copy That to Cambridge on October 3 for the first Sires’ Stakes heat.

“We know he’ll go better left-handed after how he trialled there last week.” 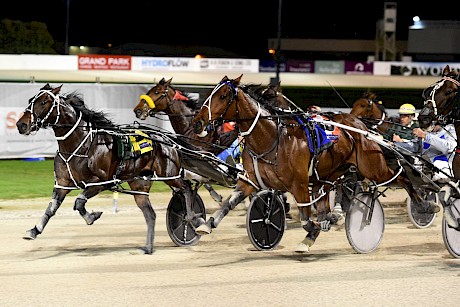 The line is looming and Line Up is about to be gobbled up by Ball Of Art and Matai Geordie.Cambridge next stop

Cambridge will be the next stop for Line Up too, after he was narrowly beaten earlier in the night.

And Green is hoping a couple of crucial gear changes will also help the colt pace better after he threw in some rough steps in the running.

The beautifully gaited pacer took Butcher by complete surprise when he galloped for a few strides coming out of the gate, a split second after No.1 rival Henry Hu made a similar mistake.

“Scotty (Phelan) was getting rough and I thought I’d try to cross him when, whoa, mine galloped for two strides.”

Butcher was still able to secure a perfect one-one sit for Line Up and while he shot to the front early in the run home, he was gobbled up right on the post by first Ball Or Art then Matai Geordie, going under by a half head and a nose.

Butcher reported Line Up was throwing the odd step in and Green is convinced he needs to pull up the colt’s hopples.

“He’s only a little guy and is wearing a 56 inch hopple. I reckon I need to pull him up two holes.”

Butcher also recommended a gaiting strap to keep Line up straighter after detecting he was brushing his right knee in the warm-up.

“When you’re running at these speeds, even fine adjustments can make a huge difference. You can’t be doing things wrong at this level.” 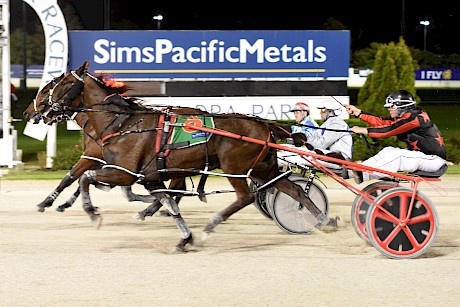 Line Up, inner, goes down by a half head and a nose. PHOTO: Kenton Wright/Race Images.Both Butcher and Green are also set on going back to using full blinds and ear plugs on Line Up.

Green raced the horse in an open bridle on Friday night after Butcher reported he was getting too keen in blinds.

No arguments from Green: “When we put the blinkers on that’s when he started lifting his game.”

Green, like Butcher is prepared to forgive Line Up his defeat.

Said Green: “He’s still very green. We’ll put it down to experience and press on.”

And Butcher: “I’ll give him the benefit of doubt. He was up against older horses, they went 2:41, a half in 55, he was only just nutted, and it was only his second run back.