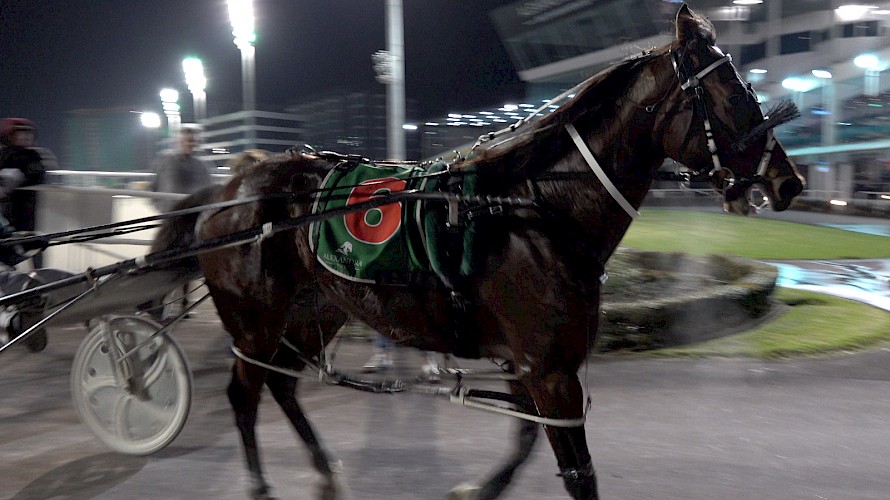 Copy That comes off the track after being pulled up mid-race.

Driver Maurice McKendry knew soon after the start of tonight’s feature race at Alexandra Park that he was in trouble with the favourite Copy That.

McKendry planned to drive the country’s top three-year-old quietly at the rear of the field in his first run back from a spell.

But the more McKendry tried to restrain the colt, the more he hit the sulky wheels with his hind legs and the more panicky he got.

Copy That raced so fiercely in the parked position that McKendry had no option but to pull pin 1200 metres out.

“He was just bolting on me and every time he nicked the cart he got worse.

“I couldn’t let him keep going round like that so I eased him out of the race and, as soon as he slowed up, he was all right again.”

Trainer Ray Green could quickly see something was wrong and said McKendry definitely did the right thing by the horse in pulling him out of the race.

“I’m just relieved he’s all right and the problem is easily rectified.”

Green said the sulky he used on Copy That was the same one he towed to success at Addington in March when he beat One Change in the Vero Flying Stakes.

But he would certainly have to let it out more when the horse returned to the Park in two weeks for his next start, which would be a 2200 metres mobile.

“The one positive we can take out of tonight is the way he stepped off from the stand. That was very encouraging and will set him up for future standing starts.”

The most famous case of a horse striking the sulky wheels was in the 2009 Interdominion Grand Final on the Gold Coast when it caused Auckland Reactor to get so fired up he choked down and tailed right off 500 metres from home.

“I know the punters will be hurting but at least it wasn’t a big race tonight,” Green said.

With Copy That out of play the race was won easily by the second favourite and back marker On The Cards who beat stablemate Major Jellis by four and a half lengths.