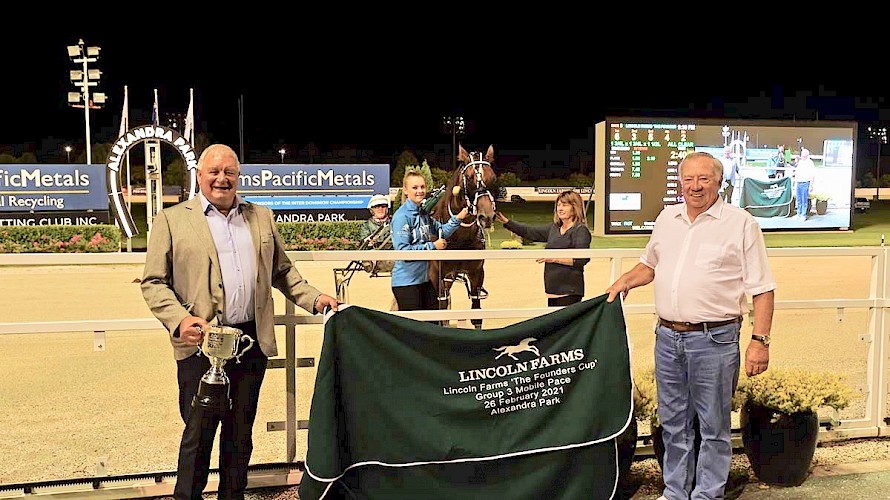 Copy That blew off the cobwebs for next week’s $47,500 City Of Auckland Free-for-all with little more than a jog round in tonight’s The Founders Cup at Alexandra Park.

In winning the Lincoln Farms’ sponsored race, Lincoln Farms’ stable star had to pace only 2:40.7, more than four seconds slower than his 2:36.4 win over the same 2200 metres trip on the course last September.

The fresh-up win was never in doubt after driver Maurice McKendry was easily able to cross from the outside of the gate to lead on the first turn.

“They were never going to stop me getting the front,” McKendry told trainer Ray Green afterwards.

“Maurice was pretty high on him and said he just jogged it,” Green said.

McKendry never put Copy That under pressure as he reeled off a 55.6 last half and 26.4 quarter to beat Christianshavtime by one and three quarter lengths with the same margin to third-placed Spirit Of St Louis. 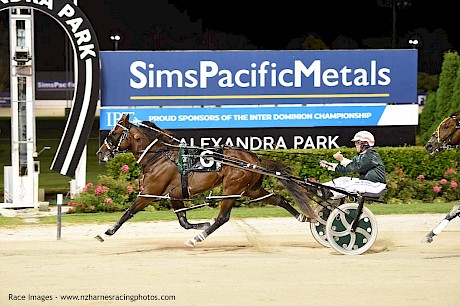 Copy That jogs it, one and three-quarter lengths ahead of Christianshavtime. PHOTO: Megan Liefting/Race Images.The easiest $15,675 Melbourne owner Merv Butterworth will ever make had the owner “pretty excited” in a post race phone call to Green.

“He’s pulled up really well and we’ll be here next week for the City Of Auckland Free-For-All,” Green said.

Following that Copy That will trek south to contest the Group I $100,000 Breckon Farms/All Stars Racing Easter Cup (3200m) at Addington on April 3.

Butterworth was left ruing what might have been an hour earlier when She Reigns, whom he races with Team Rogerson, staged a spectacular comeback after an early mistake to run a close third to Emma Frost in the $27,930 Group III Northern Trotting Stakes.

Beaten only two lengths after starting from the 30 metre back mark, She Reigns trotted 3:24.5 for the 2700 metres, just six tenths of a second outside Pretty Majestic’s New Zealand mares’ record.

Earlier, American Dealer lost no friends for Friday’s $200,000 Woodlands Northern Derby after having to sit parked for the last lap of the Derby Prelude.

Having his first start for two months the little fighter stuck gamely to finish a neck and three lengths from winner Krug, who held off a spirited late dash from It’s All About Faith.