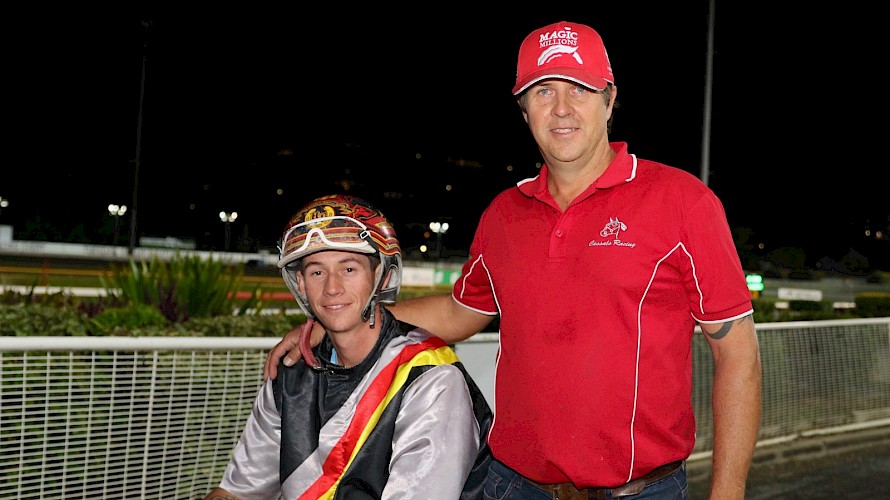 Trainer Al Barnes, with son Hayden, who is trimming down to resume his driving career. PHOTO: Dan Costello.

Dad’s exercising and getting back in the cart - goal to fit his birthday suit into driving suit!

It won’t just be a new look track and a newly invigorated Lincoln Farms team at Albion Park on Tuesday, even trainer Al Barnes is morphing into a lean, mean fighting machine.

Barnes, who celebrates his 48th birthday today, is very confident of winning with both Larry Lincoln and Man Of Action on Tuesday on the newly refurbished track.

And he will also don the silks again behind his own trotter Whataboyz in the opening race as he works towards his new goal of trimming down to resurrect his career in the cart.

With Barnes’ sons Hayden and Brendan set on working in the mines next year, he plans on taking over the stable’s driving duties.

“I only had three drives last year but I’m on my way down to my driving weight again and thought I’d start getting my eye in on Tuesday.”

Barnes says his health has improved out of sight since he threw away his pills and started exercising.

“I’ve got a lot of years of conditioning to lose but I’m trying to get down to the low 70s to see if I can fit back into my American suit.” Barnes wore the one-piece outfit when he trained and drove in the United States nearly 20 years ago.

While it might still be a stretch to get his birthday suit into his American suit, Barnes is very bullish he will take two winners to the track on Tuesday.

Neither Larry Lincoln nor Man Of Action has raced since September 18 after which upgrading work started at Albion Park, Barnes not keen to take them to the tight Redcliffe circuit.

“The track has been cut and resurveyed and the home turn is back up to 9 degrees. The turns were getting too flat - the home turn was down to 4 degrees - and that’s why it was so leader biased.

“It was still really heavy last Saturday night but once it settles in it will be good, we need some rain to help with that.” 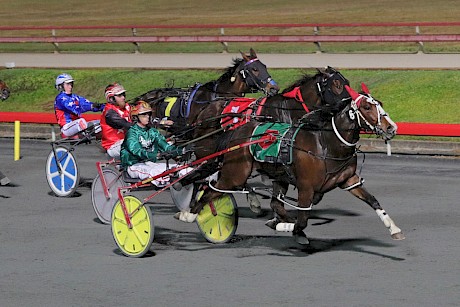 Larry Lincoln scores an impressive debut win in Brisbane. PHOTO: Dan Costello.Barnes expects Larry Lincoln to repeat his impressive first-up win in the fourth race, where he starts from three on the gate over 2138 metres.

Larry Lincoln did plenty of work over 1660 metres in his Brisbane debut but still won comfortably in a 1:55 mile rate.

“He should have a bit of respect after that and the extra distance won’t be a problem. While the two horses inside him get out well, I can’t see them holding us out.

“And he’ll still be too good for them even if he has to sit parked outside them.

“He scored a tough win first-up and a lot of the local trainers were impressed by him.

“I can’t fault the way he’s working at home. 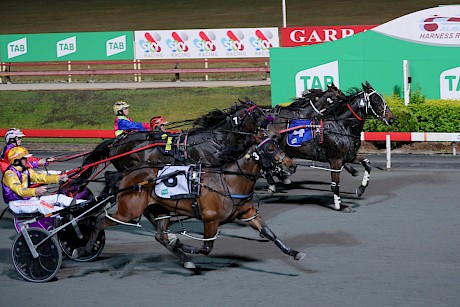 “He’s really good and has improved out of sight from his first run.”

Barnes reported before that race that Man Of Action was well in need of the run yet he still went under only in the last stride in a 1:54.1 mile rate.

“From one on the second row he’s going to get a great trip behind the leader. Rocks Or Diamonds should hold the lead and the first half dozen steps will tell the story.”

Man Of Action races at 6.47pm NZ time at Albion Park on Tuesday.