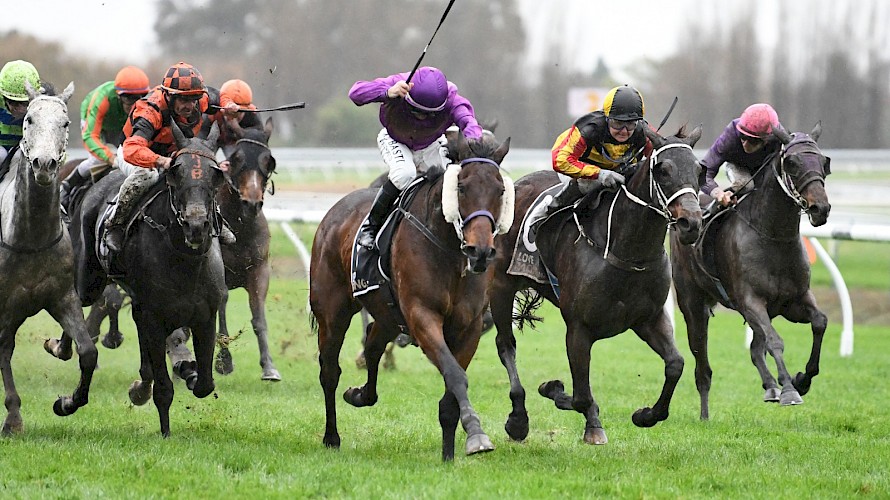 Johnny Lincoln, centre, finds reserves for Robbie Hannam in his fresh-up win at Awapuni in May. PHOTO: Peter Rubery/Race Images.

There might be a couple of better horses in the race but Johnny Lincoln’s light weight and ability to handle the expected sticky ground will stand to him at Otaki on Saturday.

Johnny Lincoln will face only six rivals in the third race, with the withdrawals of two of his more fancied rivals, Irish Flame and Elle Eye Are and, stepping up to a rating 82 event he gets in with the minimum weight of 54 kilos.

That’s a 3.5kg weight relief on last time at Awapuni when he ran fourth to the talented Obsessive, when in need of the run, says trainer Lisa Latta.

“He just came to the end of it late as it had been five weeks in between runs for him.”

It followed a surprise first-up win over 1550 metres on his home course, when he showed great courage to beat Tiro on heavy 10 footing, shedding his tag as the perennial bridesmaid.

Latta intended stepping Johnny Lincoln up to a middle distance but says Saturday’s 1600 metre test will be more like 1800 metres.

“The track will be sticky but I think that will suit him better than a really deep one.

“I’m really happy with him as he has continued to work well. I believe he can be competitive and I’m expecting another good run from him.”

Bookies have opened Johnny Lincoln fourth favourite at $6 behind Atlanta Peach, Our Bandit and High Quality.

Platinum Volos on the other hand is second to rank outsider at $41 in the sixth race and it’s hard to see him belying that quote.

In what Latta describes as a tidy line-up, she says he will need to bring his A game to be in the finish.

Platinum Volos is finally over his issues wth the starting gates but even after making a good beginning last time at Trentham and racing fourth, just in behind the leaders, he was under pressure a long way from home and finished more than 20 lengths from winner Armaguard.

Latta says rider Madan Singh believed the Trentham bog tripped him that day so he get another chance on Saturday with only 53kg on his back, 3.5kg less than last time.

“He’s on borrowed time,” says Latta. “He needs to front up. We’re thinking of taking him south on a one-way ticket.”