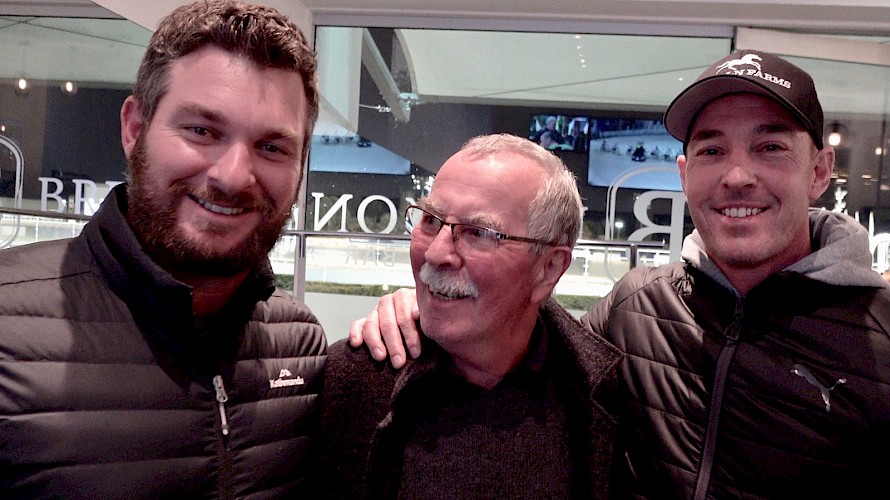 Duncan Chisholm couldn’t have thought of two better people with whom to celebrate one of his most exciting wins than top golfers Ryan Fox and Gareth Paddison.

In a bizarre finish to the fourth race at Auckland tonight Chisholm, 67, cursed as he watched his horse Man Of Action throw away a seemingly winning break with a mid stretch gallop.

Then, seconds later, when he heard commentator Aaron White call American Dealer home, he realised the other horse he had shares in won the race anyway.

“I didn’t even see American Dealer come through, I was too busy tearing my hair out after Man Of Action broke,” said Chisholm who has a share in both horses along with his brothers John and Dave and their golfing mate Warwick Orr.

Chisholm made sure he had his photo taken with the two famous golfers after the win to show off to his Mangawhai buddies, Fox and Paddison there for the first time as guests of Lincoln Farms’ boss John Street. 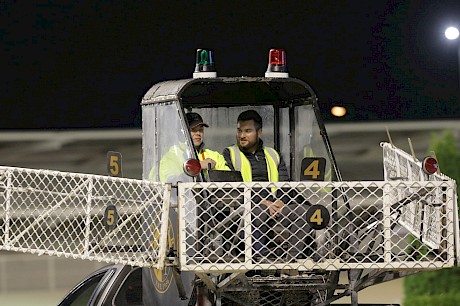 Ryan Fox chats to starter Frank Phelan as the mobile pulls away for the start of the sixth race. PHOTO: Trish Dunell.The pair were gifted shares in Franco Nandor and Captain Nemo after filling the top two spots at the recent Wairakei Invitational and, while their charges could finish only fourth and fifth earlier in the night, they joined in the celebrations after American Dealer’s win.

Fox, who has just been issued an invitation to play in the US Open, later enjoyed a ride in the mobile alongside starter Frank Phelan for the sixth race.

Ironically it was through golf that Chisholm first got to know Street and became involved in his unique partnerships.

By sheer chance, Chisholm caddied for the pro golfer who was part of a team comprising Street, his business manager Ian Middleton and Richard Lee at a pro-am Street sponsored at Mangawhai four years ago.

“John said I should get a bunch of guys together and take a share in a horse. It just happened that I already knew his trainer Ray Green from way back and had always followed and backed the Lincoln Farms’ horses.”

In less than three years the lucky golfers have now shared in 20 wins, 14 with Make Way, two with Man of Action, two with American Dealer, and one each with Linc’s Tiger and Linc’s Grace. 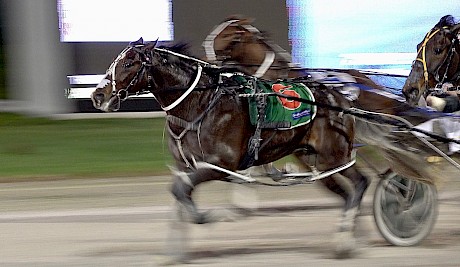 American Dealer powers home to score a fresh-up win.Chisholm said tonight’s win would be a real boost for his wife Kathy who is unwell with an abdominal cyst and watched the race with her sisters from a motel just down the road.

In accepting the trophy for the race from Street, Chisholm thanked him for what Lincoln Farms was doing for racing through its partnerships.

The partnership which races American Dealer have certainly lucked into an exciting prospect. Also in the team with John and Lynne Street, Middleton and Green are Tim White, Annette and Kevin Crosswell, Ian Kedzlie and Bob Best.

Green described American Dealer as a real little racehorse and praised his effort to come from three back in the running line, mount a four-wide challenge on the home turn and still get up by a head over Christianshavtime.

The leaders paced the last 800 metres in 57.9 and 28.6 so the American Ideal colt’s effort was full of merit and credited him with his second win from just three starts. 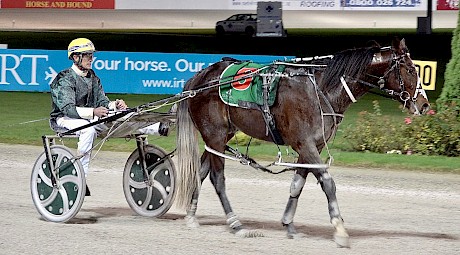 David Butcher brings American Dealer back after his excellent win.Driver Andre Poutama told Green Man Of Action dropped the bit and seemed to lose concentration when he pulled the plugs.

“He would have been better if another horse had been beside him,” Green said.

Larry Lincoln showed he might not be strong enough yet to burn the candle at both ends when, after being lit up by Zachary Butcher from wide out to lead, then trail, he weakened in the run home to finish last.