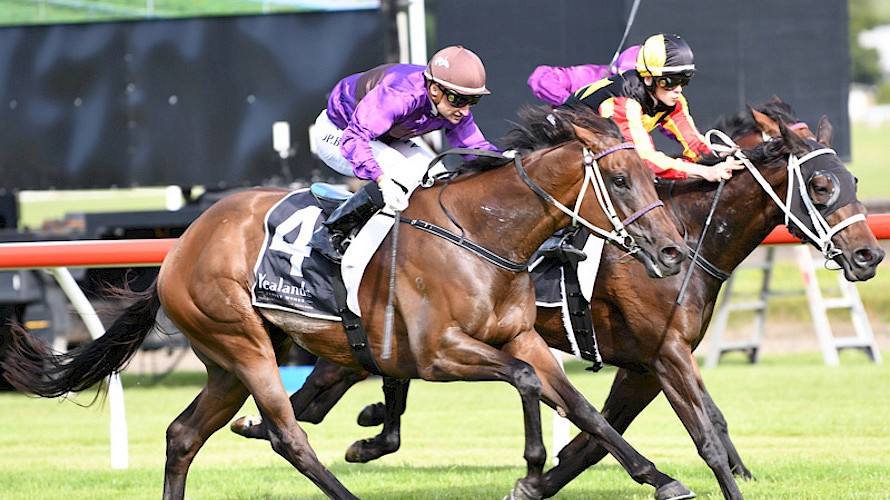 Lincoln Raider and Opie Bosson, outer, are about to sail past Jessiegee and Father Lenihan, obscured. PHOTO: Race Images.

Exciting Falls and Raider both earmarked for Ellerslie on Boxing Day

Gun Lincoln Farms gallopers Lincoln Falls and Lincoln Raider will both be seen next at Ellerslie on Boxing Day.

Bosson was full of praise for Lincoln Raider after he came from last at the 600 metre mark with a big finish that carried him past Jessiegee and stablemate Father Lenihan close to the post.

“Opie says while he’s still learning he’s certainly pretty smart but we’ll just have to wait and see if he can ride him next time.’’

Latta is hoping Bosson, the contracted rider for Te Akau, can team again with Lincoln Raider in the $80,000 Dunstan 1500 Championship Final, a special conditions event that will suit him perfectly. 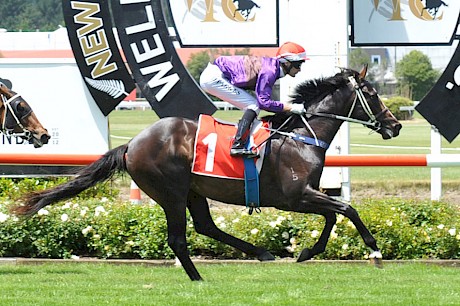 Lincoln Falls … too classy but still lacking in ringcraft. PHOTO: Race Images.Lincoln Falls’ target is the $60,000 Uncle Remus Stakes (1400m) which will serve a three-pronged purpose.

“It will give him a trip away, a run right-handed, and a look at Ellerslie,’’ says Latta who is keen to familiarise the colt with the peculiarities of the track before he returns for the $1 million New Zealand Derby in March.

“I thought it was best if I gave him one up there now rather than leave it all ’til February which has been our hottest month.’’

Parkes was impressed by the way Lincoln Falls picked up an albeit weak bunch off a slow tempo, given he still lacks a lot of ringcraft.

Latta was only a nose and a short head away from bagging a third win on Wellington’s premier card last Saturday when Johnny Lincoln was caught in the shadows of the post after leading all the way down the long Trentham straight.

Platinum Invador, arrowed, is flying after being clear very late.And she was delighted with the effort of Platinum Invador who got back from a wide draw, was in heavy traffic up the straight, but flew when finally clear 100 metres out to be only 2.6 lengths from the winner.

The Redwood three-year-old goes next to Otaki on December 20 where he should be mighty hard to beat in a maiden mile.