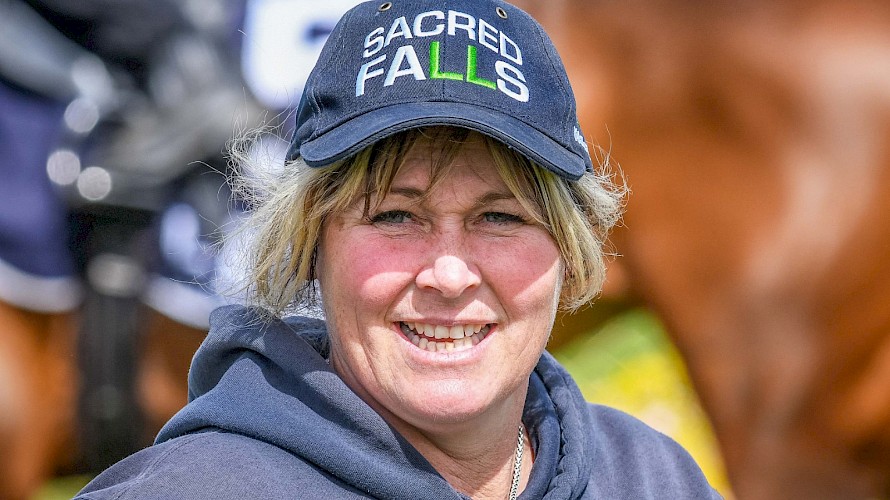 Lisa Latta … took up an offer for help from John Street in 1998 and has never looked back. PHOTO: Royden Williams

Lisa’s top-rated colt has been turned out for a month to be readied for a New Zealand Derby campaign.

Latta has just brought Savabeel colt Lincoln Lane back into work after an eight week layoff and is keen on his staying future. “He’s a lovely staying type, he’s got a bit of size but he’s also quite athletic. He’s a couple of weeks away from a jumpout.’’

“This horse has improved out of sight recently. I had to scratch him from Waverley because of a stone bruise but he’s over that now. He’ll head to Woodville next week where he might be a bit inexperienced but he’s worth following.’’

“In hindsight I shouldn’t have started her in the Hawkes Bay Guineas. It was too tough an ask from that wide draw. She’s better than that.’’

Latta has pulled the pin on Makfi filly Platinum Rapper this prep but says she has shown a lot of ability. “I wasn’t happy with the way she was working. She was doing a lot of lying down so is obviously going through a growth spurt. We’ll get her ready for the autumn.’’

Latta says the Showcasing colt has done about six weeks work in a new preparation. “He’s always shown a lot but had only one start on a heavy track and never handled it.’’

Lincoln Farms’ trainer Lisa Latta admits to plenty of excitement at the season ahead with the chance of achieving a long held dream and a couple of real milestones in sight.

Latta, 50, has high hopes that smart colt Lincoln Falls will fashion into a New Zealand Derby chance, so much so that she has put him out for a break now to concentrate on the Ellerslie classic in March.

And the Dundeel colt is just at the tip of a phalanx of talented Lincoln Farms three-year-olds which Latta has been quietly putting through their paces.

“I usually have one or two nice young ones but I have an exciting team this year. I’ve always wanted to win a derby and Lincoln Falls isn’t my only chance.’’

Since John and Lynne Street first gave Latta a horse in 1998, best calculations put her tally now at 279 for the Auckland couple.

It was the Streets who encouraged Latta to try her hand at training when her then partner, Malcom Smith, died suddenly in December, 1998.

Latta made an instant impression on the Streets, training her first winner for them on January 2, 1999 when Resonare scored at Tauherenikau.

Resonare went on to claim the Group III Thompson Handicap and that sealed their relationship.

In the interim Lincoln Farms has been instrumental in helping Latta to become the first woman to win the national trainers’ premiership when in 2013-14 she saddled 87 winners.

Latta is now on the downhill stretch to a milestone reached by few trainers - that of training 1000 winners.

New Zealand Thoroughbred Racing records have her present tally at 908, suggesting all going well she should achieve the feat in the next two seasons.

Latta says she has a big team helping her at Awapuni, about 20 in all, and now that it’s school holidays son Josh, 14, and daughter Jaime, 12, are there at the stable chipping in too.

That’s when they can be dragged out of bed at 5am!