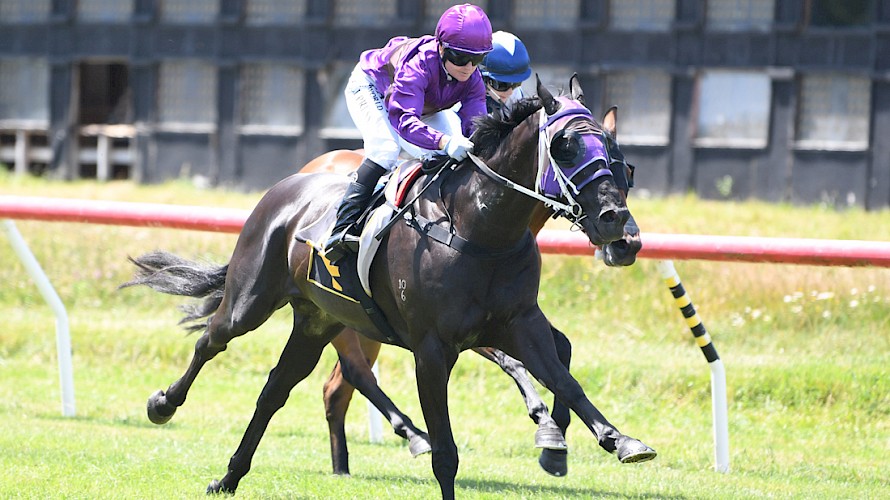 “He won over 1000 metres at this meeting last year and will be extremely hard to beat again from the inside draw which really suits him. He had absolutely no favours last start when he never got any clear air. Lisa (Allpress) is back on.”

No prizes for guessing that trainer Lisa Latta has found another 1000 metre race for Lincoln’s Kruz later this month.

The impressive black gelding made it two starts for two wins over 1000 metres at Tauherenikau when he exploded clear of his rivals close to home yesterday to easily beat Hold The Press and Casaquinman.

No time was recorded for the race but the maidens on the day clocked 56.16 and the two-year-olds 55.74 so it must have been swift.

“They run along more over 1000 metres, and he gets off the bit, which really helps him as he can get up and travelling a bit keenly.”

Drawing one and having only five rivals on Sunday also helped the gelding as he didn’t get too far off the leaders, she said. 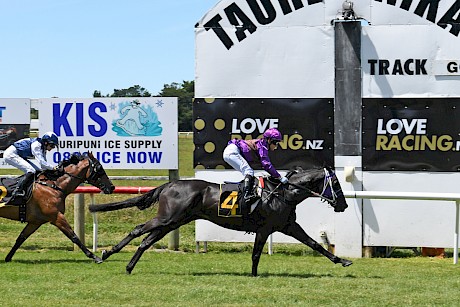 Lincoln’s Kruz and Lisa Allpress have Hold The Press well covered at Tauherenikau. PHOTO: Peter Rubery/Race Images.Confidently tipped by Latta, after being untested when blocked at his last start, Lincoln’s Kruz is much more settled and holding his form well this campaign with two wins and a second in just six starts.

“He’s definitely a lot stronger as a five-year-old. He’s carrying his condition a lot better and not lightening off after his races like he used to.”

Latta said the stable is now able to also keep on top of the foot trouble which hampered his earlier preparations - “He’s quite flat-footed.”

The black galloper, who caught the eye of Lincoln Farms’ boss John Street walking around the sale ring at Karaka at the 2018 ready-to-run sale of two-year-olds, has the pedigree to perform at a higher level. By sprint star Kuroshio, his dam, Myskina is a half sister to Group I Oakleigh Plate winner Miss Kournikova.

“I’ve sent her south for the better tracks and, while the track is a heavy 8, it’s not as heavy as what she has been racing on and hopefully will come back a little more. From the good draw I expect Rohan Mudhoo to possie her up fourth or fifth and she should go a bold race in slightly easier company.”