Drying conditions in Hawera for the next two days will help Lincoln Raider in his bid to strike fresh-up on Saturday but hinder stablemate Lincoln Dreamer.

Typical spring conditions have kept trainer Lisa Latta guessing about whether to start classy galloper Lincoln Raider at Hawera after 17mm of rain overnight saw the track rating downgraded from dead 4 to dead 6.

Any more rain and Latta says the line will go through Lincoln Raider as he simply cannot handle it slow.

But Taranaki racing secretary Carey Hobbs is tipping the track will come back to a dead 5 or even a dead 4 with no more rain predicted until raceday.

“It’s supposed to be mainly sunny this afternoon and tomorrow and I’d say it will come back to a lovely dead 5 spring track.”

Hobbs says the track was verti-drained last month, which will see last night’s rainfall absorbed deep into the ground.

Latta’s task now is to find a suitable claiming rider for Lincoln Raider to reduce his top weight of 60.5kg.

And that, in itself, is no easy assignment as Lincoln Raider needs a strong pilot to control him and coax him into producing his big finish. 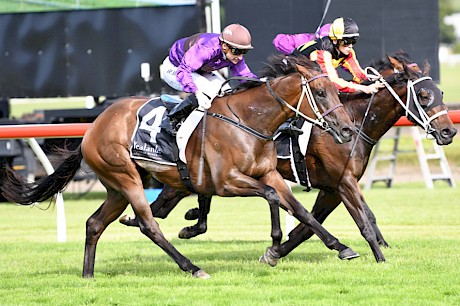 Lincoln Raider, outer, scored two impressive wins from the back at Trentham last season. PHOTO: Peter Rubery/Race Images.Lincoln Raider looked to be a top miler in the making last season when he scored two big come-from-behind wins at Trentham but he was stopped in his tracks after running second in the Douro Cup in January.

An operation to remove a bone chip from his knee in February saw him sent for a long spell and he has been brought back quietly with four trials in each of July, August, September and October.

It wasn’t until he struck better footing at Otaki on October 2 that Latta saw what she wanted when he roared home when clear to win his 1000 metre heat very easily under Robbie Hannam.

Latta was so pleased with the trial she advanced his planned resumption at Trentham by two weeks.

“This will be a good pipe opener for him and as long as he is hitting the line strongly I will be happy.”

Latta toyed with the idea of sending Lincoln Raider south for the Couplands Mile but has now ruled that out, not wanting to subject the horse to the likelihood of rock hard footing at Riccarton, often prevalent at the cup carnival.

Lincoln Raider has opened a $3.80 favourite with the TAB bookies but Latta also lines up Platinum Volos in the race, a $21 outsider to whom she gives a sneaky chance.

“This is a huge drop in class for him - his last two races have been in virtually open class races - and he’s back to his preferred 1200 metres.”

Last start at Taranaki Platinum Volos ran a brave third, run down only late by the in-form Polly Grey and Battle Time over 1400 metres. 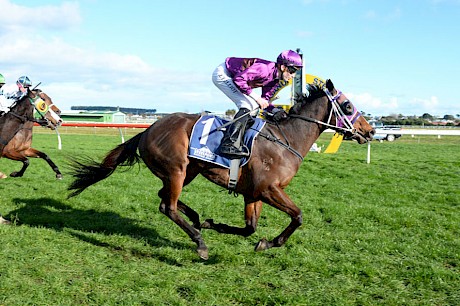 Lincoln Dreamer … will come with a big finish. PHOTO: Peter Rubery/Race Images.The footing is also key to the chances of Lincoln Dreamer, who is a $5 favourite in the opening race and the first of six Lincoln Farms runners carded to go round on Saturday.

Lincoln Dreamer needs wetter tracks to show his best but Latta says she will probably start him if the track stalls at a dead 5.

Latta reports Lincoln Dreamer has really improved since his last outing when he turned in a real eye-catcher at Awapuni - clearing heels at the 200 metre mark he really went into overdrive, flashing into third, just a length from winner Colorado Star.

The Savabeel five-year-old gets to tackle 1600 metres on Saturday and his very wide gate won’t count him out as he came from the tail of the field at Awapuni.

“He’s on the up but next winter will be his go,” says Latta.

Saturday marks the return of classy stayer Platinum Invador and while he is working very well, Latta can’t see him featuring in the money in race six over only 1400 metres.

The New Zealand Derby placegetter gets a 3kg claim through talented apprentice Kozzi Asano but he will have to negotiate his way through a big field of 16 runners.

Platinum Invador showed he had come back in great heart when winning a 1200 metre trial at Foxton on September 19 but faces some fast gallopers on Saturday.

“He is ready for a bold race and should hit the line strongly.”

Father Lenihan (race 2) and Johnny Lincoln (race 4) are both handicapped by wide draws.