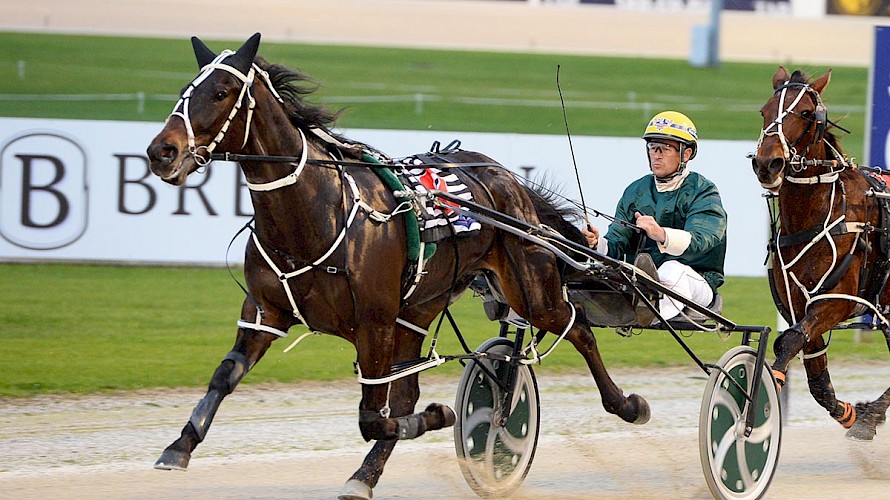 Top golfer Ryan Fox was preparing to tee off in the English Open at Hertfordshire when Franco Nandor led all the way to win at Alexandra Park on Thursday night.

But Fox, who was gifted a 20% share in the Mach Three three-year-old by Lincoln Farms’ boss John Street after winning the Wairakei Invitational in June, heard the good news via a text from his mum.

“I was disappointed I couldn’t be there but hopefully I’ll get another chance to see him win later in the year,” Fox said via email.

Fox hit five birdies on his way to a solid opening round of 67, finishing four under, just four shots behind leader Northern Irishman Cormac Sharvin.

It continued his great start to the European Tour’s UK Swing, six events in England and Wales over the next six weeks.

And he was a solid 15th in the Hero Open a few days later in Birmingham.

Fox hadn’t played in a tournament since the New Zealand Open in early March and said “it’s nice to get back into the swing of things.

Fox’s share of Franco Nandor’s $6600 winning purse pales in comparison - he will get just $1320. But the thrill of winning transcends that, especially since it came just two weeks after fellow Kiwi golfer Gareth Paddison enjoyed the win by Captain Nemo at Cambridge.

Paddison was given a 10% share in the Captaintreacherous colt when he finished second to Fox at Wairakei.

Captain Nemo could manage only sixth last night but had a second row to contend with while Franco Nandor drew perfectly in two.

Fox won’t be in danger of missing Franco Nandor again any time soon as Lincoln Farms’ trainer Ray Green will now turn him out for a good spell.

“Gelding didn’t agree with him so we’ll give him a good break to strengthen.”

Even though Franco Nandor lasted by a neck in a tight four-way finish with Military Man, Dixie Reign and Suidelike Major, Green said you could see he was weak at the finish.

There’ll be a nice surprise awaiting Fox on his return to New Zealand after he’s completed his two weeks in managed isolation.

Fox, who has been invited to play in the US Open from September 17 to 20, has a largely lonely existence ahead of him - “I’ve got three months by myself in a hotel room.”

Fox, who must have his temperature checked every day as a COVID-19 precaution, can eat breakfast, lunch and dinner only with his caddy for the next six weeks, Northern Irishman Chris Selfridge, and he has to confine himself to his own room when not on the golf course or dining.

At least now he can watch a race replay of Franco Nandor winning on www.hrnz.co.nz when he wants a break from playing Assassin’s Creed on Xbox.