The yelling wasn’t quite as loud as when Copy That won the New Zealand Trotting Cup but when Ray Green’s galloper Copy Me In led all the way at Invercargill today it completed a great week for the Lincoln Farms’ trainer.

Just as the team gathered round the TV set in the coffee room eight days ago for the $600,000 feature at Addington, they were there to cheer on ‘Billy’ when he bagged a $12,000 maiden at Ascot Park, scraping home by half a head.

“The rider didn’t knock him around and I was starting to wonder what he was doing,” Green joked of the typically cool ride by top jockey Chris Johnson.

Green, who trains a big team of pacers at Lincoln Farms, admits his foray into owning a galloper was an indulgence, resulting from a “spontaneous, impulsive act”. 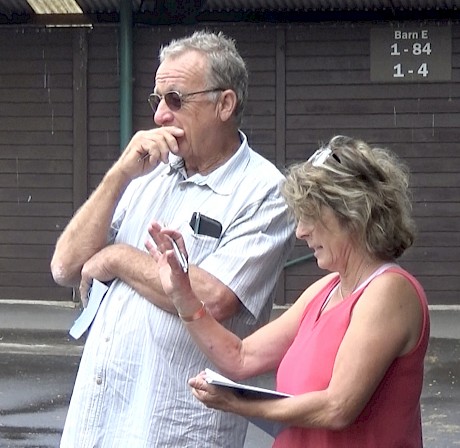 Super spotter Debbie Green gives hubby Ray the lowdown on a youngster at the sales.“Deb and I went to a festival sale at Karaka just for something to do.”

But Debbie Green, whose claims to fame include having bought, and onsold, top class pacers Hard Copy (27 wins, $1.27m) and Copy That (23 wins, $954,672) for bargain basement prices, spotted a Sacred Falls colt she liked.

The colt also had some breeding on his side. His dam, Victoria’s Reign, was out of a half sister to New Zealand Derby winner Great Command.

Green was stunned when the hammer came down at $7000 and the colt was his.

Even though Green had dabbled in gallopers in the mid 1990s, he says he was far too busy to contemplate training another.

“I had a whack at training them for a while when I was at Kumeu. I had six at one stage and won a race with Pure Awareness, who I owned with a mate. He had a farm in Reporoa and we got him for $600 worth of hay.”

Pure Awareness ended up winning two races, one at Avondale under Gary Grylls in 1995 and one at Rotorua in 1996.

“But I realised after a while that it was a waste of time - you’re buggered if you haven’t got good riders.”

Green instead gave the youngster to Tayla Wenn (jockey) to get him going in the saddle and when she departed for Australia, he ended up with Jenna Mahoney, who had taken a liking to him when training out of the same South Auckland barn.

“But it’s hard going up here just getting starts. I nominated him numerous times and never got in.” 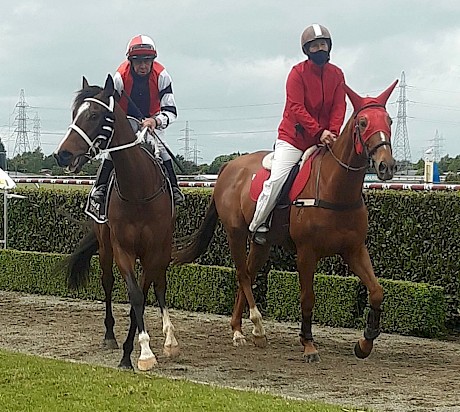 Chris Johnson brings Copy Me In back to scale at Ascot Park today.Copy Me In raced six times in the north but, while Green says the riders liked him, for one reason or another things never went his way, bad draws and interrupted runs blotting his form line.

“It started to get too expensive so I did a deal and sent him down south to Michael House, where it’s easier to win and there are more opportunities.”

The same ploy has worked well for Lincoln Farms owners John and Lynne Street who have had success in the black, red and white silks now with Benny Lincoln, Louie Lincoln and Master Lincoln.

Green says he’ll wait to get some feedback from Johnson before deciding what to do next with Copy Me In who was backed in to be the $3.70 tote favourite in only his second start for House.

“It’s a bit of a relief to get some money back (today’s winning purse was $6720). And, no, I didn’t back him, that would have been the kiss of death. I should have backed all the other horses in the race and that definitely would have got him home. I’m a hopeless punter.”