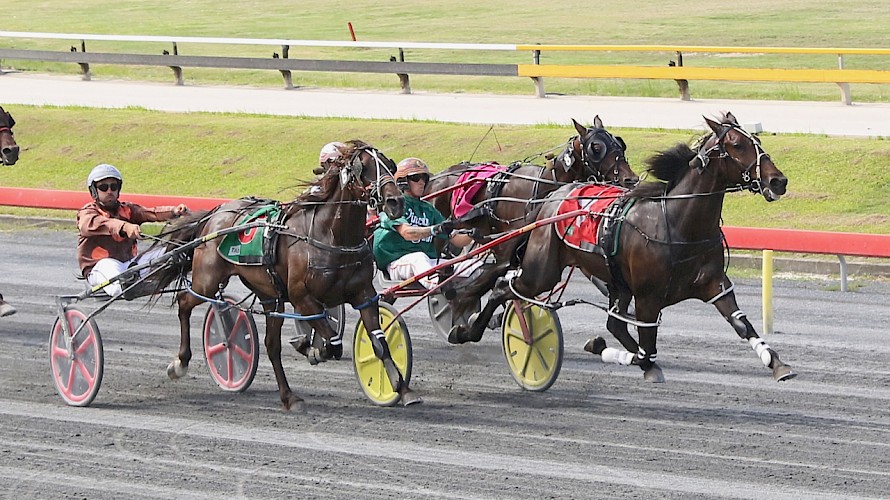 Bondi Shake has Blue Shard and Coppice well covered at the finish at Albion Park on Tuesday. PHOTO: Dan Costello.

Trainer Al Barnes loved the report he got from his driver son Hayden after Bondi Shake delivered at Albion Park today.

“Hayden said he’s a hard horse to get past when he’s in front - he’s tough and he wants to win.”

That summed up beautifully the horse’s front-running performance when he reeled of his closing 800 metres in 56.3 and 400 in 27.9 to beat Blue Shard by 2.3 metres.

“I like that he’s developing a bit of gate speed too,” Barnes said. “He’s pacing well and starting to put it all together.

“He travelled a lot stronger in front today. He’s still got a lot to learn on how to be a racehorse but he’ll keep improving.”

Barnes says Bondi Shake will have one more start as a two-year-old - the season which was extended because of Covid-19 is due to end in the New Year.

“He’ll be in three-year-old class racing in the new year but he’s racing them now anyway. He was a rating 35 today in a 35 to 51 class today so he stepped up and won anyway.”

The win took Bondi Shake’s record to two wins, two seconds and a fourth in only five starts since being sent to Brisbane for earnings of A$12,324. His New Zealand record was a poor two placings from 11 starts.

The well regarded Ranger Bomb grabs Larry Lincoln late in the stretch at Albion Park today.Larry Lincoln showed another string to his bow when he led the following race and succumbed only in the last few metres to the hot $1.60 favourite Ranger Bomb.

“Hayden was rapt with his gate speed. We haven’t asked him for it lately but it’s nice to see him use it and still get home.”

Larry Lincoln couldn’t finish off his races initially after doing early work but Barnes says he’s growing in stature as he gets more confidence.

“Hayden said he really settled well today and he ripped home the last quarter. He couldn’t do much more, running home in 26.2.

“The winner is being set for the Chariots Of Fire so it’s no disgrace being beaten by him.”

Man Of Action, who weakened from the trail to seventh, is tired, says Barnes, and will go for a break.