It was fitting that Sir Lincoln three-year-old Glenthorne broke a 19 month drought for Canterbury trainer Kevin Chapman when he broke his rivals’ hearts at Rangiora on Sunday.

In a style reminiscent of pacing great Sir Lincoln and Chapman’s former iron pacer Locharburn, the youngster destroyed his rivals with a fast pacemaking performance.

And when he crossed the line five and a half lengths in front, with his opposition spread out like Brown’s cows, Chapman couldn’t help but think of Locharburn whom he has just retired.

But he’d since been over to Australia where trainers Shane and Lauren Tritton tried to resurrect his career, only to see him re-injure a suspensory after running second in a 1:52.7 trial at Menangle. 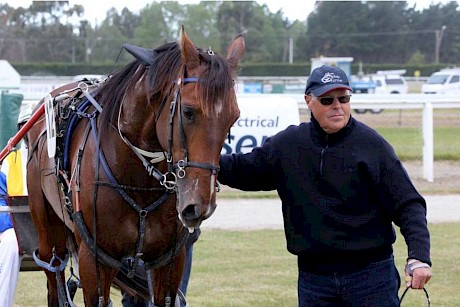 Kevin Chapman with Locharburn who he has retired after yet another injury. He and Glenthorne are related.“He’s not unlike Locharburn in that he likes a high tempo,’’ says Chapman.

“I didn’t give Tim (Williams) any instructions on Sunday but I said he wasn’t being driven hard enough.

“They ran out of the gate, then Blair attacked (on Valiant Charger who was eventually pulled up) and they tell me he ran his first half in a minute. He kept rolling and the others were on their knees at the 400.’’

It was Glenthorne’s first win in 10 starts - Chapman thought he’d get it in half the time but he ran into some strong fields as he chased a decent winning purse, racking up four seconds.

“He should have won his previous start - he missed away, was five back on the fence, got held up, and was giving the winner five lengths at the quarter.

“He’s actually never gone a bad race even when he’s been beaten.

“He’s such a genuine horse, who doesn’t do anything wrong and always tries hard. He’s strengthened up this year and just kept improving and he’ll win a few more races for sure. He’s got a bit of gate speed and can put himself in a handy position, and that’s a big thing these days.

‘They’ are Chapman’s son Jared and his 13 mates, 12 of whom have never raced a horse before.

“I actually bought the horse on spec myself because his mum and Locharburn’s mum are half sisters. I thought he was a nice type and I didn’t mind that he was by Sir Lincoln either - he was a good racehorse.

“Jared took him off me though - he said he’d put a team of mates together to race him.’’

One of the syndicate, David Hickman, was nearly banned from going to the races - when Glenthorne won on Sunday it was the first time he’d been on course to see one of his horses win for 21 years.