Don’t expect too much from Lets Strike The Gold and Make Way this week as both pacers have a conditioning run before campaigning in Queensland.

Lets Strike The Gold meets some smart types in the fifth race at Bathurst on Wednesday evening while Make Way also runs into a handy field in the second race at Penrith on Thursday night.

The assignments are more about getting the two Sydney-based pacers fit, Lets Strike The Gold after a long absence and Make Way who was given a freshen-up after his winning hat-trick at Goulburn, Penrith and Newcastle.

The pair will be part of a three-horse team which trainer Sonya Smith and Anthony Butt will take north next Tuesday for features at the Queensland winter carnival, starting with the A$21,000 Redcliffe Derby and A$31,000 Redcliffe Cup on June 22.

“I’m looking forward to Queensland,’’ says Butt. “It won’t be easy in the big races but Make Way has earned a shot and if he can get a draw and follow the speed, who knows what he can do.

“He’s absolutely flying and I couldn’t be happier with him. He came over (from New Zealand) in great order and has continued to thrive, getting better and better with racing.

“He’s amazing. His heart rate is brilliant after his workouts, he’s really in the zone at the moment.’’

Butt knows Make Way faces an uphill battle on Thursday night, drawn the outside of the second row against some nice types like Leonidas.

“But it’s more about getting a run into him. And the same goes with Goldie (Lets Strike The Gold) at Bathurst. 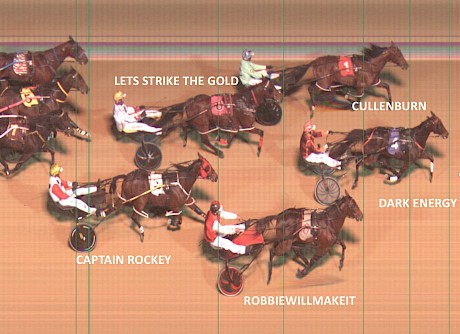 Lets Strike The Gold fights on bravely for a close fourth after doing a power of work at Newcastle.“It’s a tough race for him but it’s hard to find the right races for him away from Menangle.

“At least there are only seven in it. He’ll go back and we’ll see if he can run into a place.’’

Butt says it’s not only Thunder Dance, winner of his last three on end, and a 1:51.5 trialist at Menangle, who will test Goldie on Wednesday night.

“There are two or three good ones but that’s quite good in a way as it means one horse won’t dominate the race.’’

Butt says he was thrilled with the way Goldie fought on for fourth at Newcastle in just his second run back after doing a lot of early work then sitting parked for the last lap.

“There are a number of good races coming up for Goldie in Brisbane, below the top level, and with each run he is closer to finding his right mark.”

Smith and Butt will begin their float trip north on Tuesday, stopping halfway at a motel, complete with horse stalls, to break up the 11-hour journey.

The Sydney reinforcements will bring to six the number of pacers Lincoln Farms will have competing at the winter carnival, along with Northview Hustler, Trojan Banner, Vasari and Lincoln’s Girl.

Lets Strike The Gold races at 8.40pm NZ time at Bathurst on Wednesday.