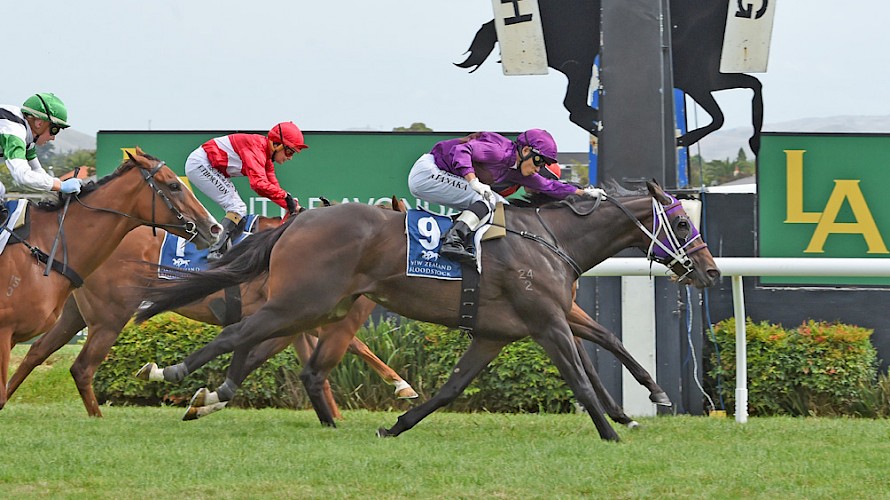 Miss Oahu scores on her favourite track at Hastings. She returns there on Tuesday.

Back to her favourite Hastings track and on better footing, Miss Oahu looks a solid chance to run in the money on New Year’s Day.

The Pins mare will be Lincoln Farms’ sole runner on Tuesday and faces only seven rivals in the third race.

Topweight with 59kg, she will be giving weight to them all - a rider shortage sees five of them with claiming apprentices on - but trainer Lisa Latta expects her to be right in the finish.

“The track was in the slow range when she failed at Awapuni last time and she needs it much better than that.’’

Miss Oahu was given a dream trip in the trail that day by rider Rosie Myers but found nothing in the run home, in complete contrast to her fresh-up third at Awapuni when she finished on well behind Brimm and All In Mana, a winner at his next start.

“We know she always saves her best races for Hastings as well so she has to be at least a solid place chance.’’

Miss Oahu won at Hastings in March and has also run a second and third on the course. Her two more recent failures there were on very wet tracks.

Latta says while Miss Oahu has drawn one from the outside she hopes rider Bridget Grylls can get a nice sit just in behind the speed.

Safely through Tuesday, Miss Oahu will head to Trentham for a $40,000 race on Wellington Cup day, January 19.