Hang on a minute, is that the same Lincoln’s Command we saw last week?

What a difference a week makes - after a dismal debut at Waipukurau, Lincoln’s Command was simply superb at the Otaki trials yesterday, romping home untested.

And so pleased was trainer Lisa Latta, she is considering racing the horse next Thursday at Otaki.

Ridden by Robbie Hannam yesterday, Lincoln’s Command jumped straight to the front of the four-horse field, where he raced keenly and kicked away to win by three lengths under a hold. The horse was going so easily 250 metres out, Hannam even had a cheeky look between his legs to see where the opposition was.

It was in complete contrast to his run last Thursday when he tailed the field, seemingly lacking any confidence or spark.

“Yes it was odd,” says Latta. “It’s hard to know whether it was the blinkers that did the trick or the slower track but he was super impressive. I know the ones behind him were probably no good but Robbie said he could have won by 10 lengths if he’d asked him for an effort.

”We also bandaged the legs he speedy cuts and that would have helped too.

“I’ll just keep an eye on the weather and might line him up at Otaki if the rain stays around.”

Lincoln’s Command, a $240,000 ready to run sale graduate, has had a much delayed start to his career after an operation to cure a cyst on his stifle, but Latta says he has ability and is bred to stay. 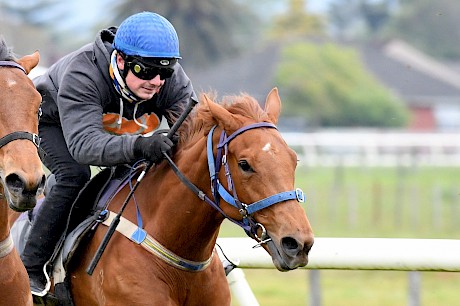 Platinum Bordeaux … handled the backup very well. PHOTO: Royden Williams.Latta rates the effort of Platinum Bordeaux to run second in her 800 metre heat as the next best run of the seven Lincoln Farms’ horses she trialled.

The two-year-old Per Incanto filly jumped nicely to sit outside the leader but was caught three wide and did very well to finish second, beaten only a length.

“The effort just told the last bit. It was a very nice trial but I have decided to give her ten days in the paddock to freshen up and look at a two-year-old race at Otaki on November 30.

“It was a big ask for a two-year-old to back up from the jumpouts the previous week but she handled it really well.” 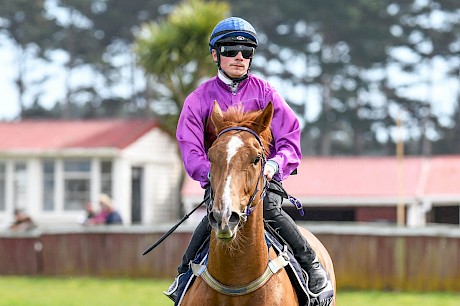 Ajay Lincoln … over his foot problem. PHOTO: Royden Williams.Talented galloper Ajay Lincoln gets the bronze medal for his effort yesterday to just miss third in his 1000 metre heat.

“I was really happy with him given he’s missed work with that foot problem,” says Latta.

“He got back in a no-win situation with two tearaway leaders and ran home well for fourth, doing his best work late. He had a bit of a blow afterwards and that should clean him up nicely to head back to the races.”

“I was pretty happy with how most of them ran yesterday.”

Platinum Invador ran third in his 1000 metre heat, sitting in the trail, switching out turning for home, and angling across heels to find room in the stretch before running home nicely.

Miss Oahu, ridden by Tim Johnson, jumped well and sat second in the running before kicking nicely, just coming to the end of it over the last 50 metres to finish third.

Lincoln Bay, who is balloted out at Awapuni on Saturday, trailed in the open 1200 metre heat and was very one paced to the line but he was up against good performers Porcelain Princess, Fascino Lass and Shadows Cast. “He had a good blow afterwards.”

Platinum Spirit, ridden by Jonathan Parkes, also trailed on the fence behind the leading bunch but just battled in the run home.

“Jonathan said he didn’t handle the track. He has gone right through from being broken in so I have decided to give him three weeks out now on the spring grass.”

It’s load-up time after another big day at the trials for the Latta stable. PHOTO: Royden Williams.