Trojan Banner continued his march through the grades with another clinical win - despite being burned off at the start.

And Lincoln’s Girl, making her Brisbane debut, never looked in doubt after being driven to the front after 400 metres.

The timely double is also a fore-runner to Barnes being given yet another Lincoln Farms horse to train, with Vasari set to move north from Sydney in the next week or two.

Barnes proved spot on with his prediction that improving three-year-old Trojan Banner might not have the gate speed to hold the early lead when Opononis Bliss crossed him out of the gate.

But once driver Hayden Barnes aimed Trojan Banner at the passing lane in the home stretch he sprung out of the trail and quickly put the issue beyond doubt.

Trojan Banner sprints up the passing lane to make it three from three in Brisbane.Unleashing a 27.7 quarter, Trojan Banner cruised to a three metre win, clocking a mile rate of 1:55.7 for the 1660 metres.

“Hayden was rapt with him and said he didn’t have to do too much to win. But I think we will have make some gear changes sooner than later as while he lets down quickly for the first 50 metres, he then switches off.

“I’ll try him in pull down blinds to teach him to run right to the line.’’

Barnes also believes he can get more gate speed out of Trojan Banner by correcting his gait.

“He gets a bit rough in behind and I think we can help him there by injecting his hocks.

“He’s only three and is still growing but I think he has a few little issues in behind.’’

Trojan Banner has them well covered at the finish.Barnes was delighted to see how quickly Trojan Banner recovered after today’s race, compared with slow recoveries after his first two wins.

“He pulled up great - you wouldn’t know he’d gone round - so fitness wise we’re getting there.

“It was good to get another nice soft win and he’ll line up again next Friday in the same c1 to c2 grade.”

Lincoln’s Girl, who will ultimately be set on a path to the Queensland Oaks, was no less impressive, considering she hadn’t raced for four and a half months and Barnes suspected she might need today’s run.

Without the benefit of a trial, Lincoln’s Girl still had too much speed for her c0 to c1 rivals and when Hayden Barnes crossed to the lead, she turned the race into a procession, scoring by 2.7 metres. 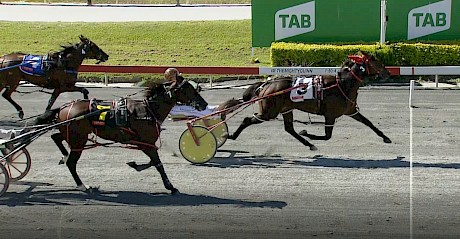 “That was pretty easy for her and Hayden didn’t knock her around,” says Barnes. “And she had a good blow afterwards so she did need it.

“She’s a nice filly and she settled really well tonight.”

Believing the filly had been cutting her wind off when racing in New Zealand, where she habitually over-raced, Barness fitted Lincoln’s Girl with an anti-choke device, like one that he uses on another former Lincoln Farms pacer Lincoln Road. The gear stops the filly from tucking her head down.

Barnes is excited to be getting the chance to train Vasari who has been struggling to compete in Sydney in recent months.

Trainer Sonya Smith and her partner Anthony Butt have done a great job with Vasari who has won 12 races and $123,000 but he has scored only once in his last 20 starts.

“If he makes the final he might stay for that otherwise he’ll go up to Brisbane straight away.

“The horse is trying his heart out but he’s being run off his feet and he needs easier company now.’’