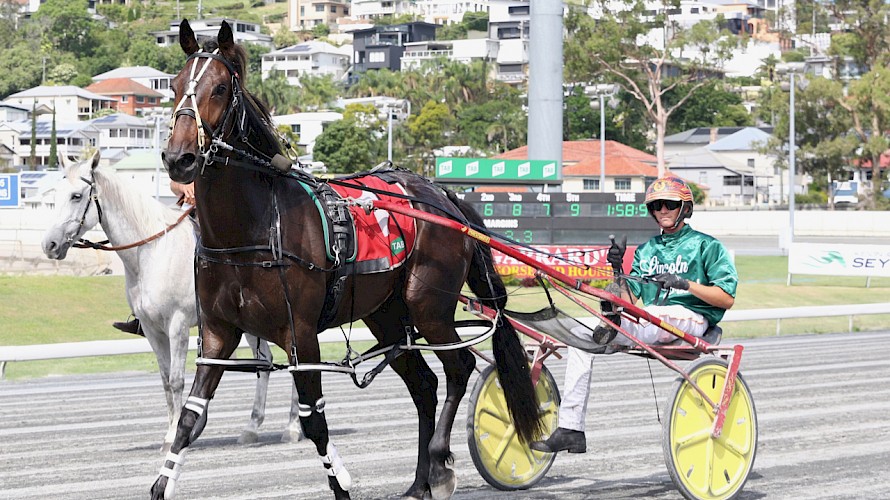 Hayden Barnes and Bondi Shake who will be well in the market at Albion Park on Tuesday. PHOTO: Dan Costello.

The opposition is easier but the draw is tough for Bondi Shake at Albion Park on Tuesday when run of the race will decide his fate.

Lincoln Farms’ improving three-year-old strikes an even bunch in the sixth race at 7.12pm NZ time when he should start one of the favourites after a solid last-start second.

But trainer Al Barnes says just how he fares will depend on how much luck his driver son Hayden gets from six on the gate.

“He’s got a tricky draw but Hayden will more than likely go forward and try to find a position. He’s better being on the speed than coming from last.

“The draw is everything here. If you’ve got to go back it’s hard making ground. It’s a very leader biased track because they run such fast times and fast last halves.

“So it will depend how much work he has to do early.”

Bondi Shake held his own out of the gate last Tuesday before going forward to breeze then secure the one-one trail soon after, spending petrol in a slick opening quarter of 27.3.

“It was a tough race that he was never going to win but he did well to run second.”

Left flat-footed when Targaryen exploded clear, Bondi Shake fought on bravely on a fast 1:54.5 mile rate for the 1660 metres.

“Targaryen has a lot of high speed which he lacks but he does have stamina.”

Given former Southlander Targaryen has won six races - four of seven since arriving in Queensland - Barnes says its certainly a drop in class on Tuesday.

“Maggie will be the one to beat - she came from off the speed to win last time in a 1:56.8 mile rate - but he’s honest and will keep trying.

“He’s a nice bread and butter horse but the winner will be determined by who gets the right position.”

Bondi Shake has notched two wins and five seconds from 11 starts during his three months in Brisbane.