When you’re just a youngster learning the ropes, a day at the races can take it out of you.

Lincoln Thunder was certainly looking tired when trainer Nigel Tiley’s daughter Kate captured him on film this morning having a kip.

It was hardly surprising, given the three-year-old had a long float trip from Pukekohe to Ruakaka yesterday, a race debut, and an even longer ride back. 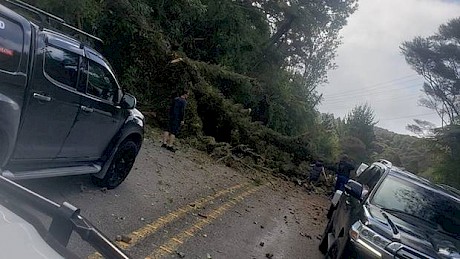 Lincoln Thunder was caught up in the traffic delays after a tree fell and blocked the road north of Warkworth.“He is a bit tired today but he had quite a long day out,” said Nigel Tiley. “A tree came down on the Dome Valley Rd (north of Warkworth) and they were stuck in traffic for a good hour and a half.”

Thunder might not have won yesterday but Tiley was very happy with his run for sixth, only five lengths from winner Ferindi.

“He took a step back when the gates opened and had to do a fair bit of work early and mid-race but he didn’t give it away.

“Vinnie (Colgan) was very impressed with him. He said he was a lovely horse who will definitely benefit from the run.

“I liked the way he pulled up. He was very, very well behaved at the races and took it all in his stride.

“He looks like he’s going to want to get over 1600 metres, and maybe beyond, with is not a bad thing for a three-year-old - that’s where all the best racing is.”

Tiley says he’ll take things easy with Thunder for the next few days then press on.