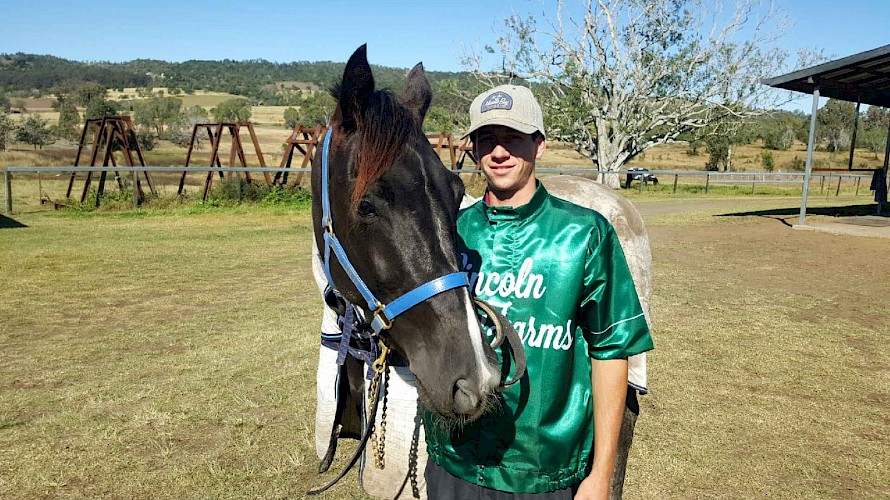 Driver Hayden Barnes, with Trojan Banner, tries out Lincoln Farms’ new colours which will be seen out for the first time on Tuesday.

It’s green for go! Hayden models the new silks which he’ll wear behind Hustler on Tuesday

Trainer Al Barnes is stoked that Northview Hustler will be the first horse to carry the new silks he’s designed for his Lincoln Farms team at Albion Park on Tuesday.

What better occasion to unveil the new green strip with white Lincoln Farms’ logo than behind the horse he hopes can make a big impact at the looming Brisbane winter carnival.

It’s hard to make a case for anything to beat the Hustler in the opening race on the card, a c5 to c8 race over 2138 metres.

With a metropolitan grading of M4, he meets a small field of six M0s and, despite starting from the outside of the gate, he will be a raging hot favourite to maintain his unbeaten record in Brisbane.

Hayden Barnes is sitting quietly as Northview Hustler clocks a brilliant 1:53.1 mile rate last Tuesday.Barnes reports the Hustler has bounced out of his incredible winning run last Tuesday when he careered away by 16 metres to clock a rare mile rate of 1:53.1 for the 2138 metres.

“This is not a hard race for him. Hayden will punch out and if they show him some respect he’ll lead. If not, he’ll sit quietly in the chair and I don’t think that would worry him too much.’’

Hustler’s task was made all the easier today with the scratching of the free-running Pinup Boy who was drawn to contest the early lead.

“He could be a pest and lead. He’s not a danger of beating us but he might get in the way.’’

Vettel has a fastest mile time of 1:51.5 and scored all the way at Menangle three starts ago in 1:53.

Hustler’s 1:53.1 is easily the fastest mile rate for Tuesday’s distance range, the next best being Vettel’s 1:55.8.

Tuesday’s race will be the last for Northview Hustler until June 22 when he contests the A$31,400 Redcliffe Cup but Barnes is likely to trial the horse there next week to make sure he can handle the tight triangular shaped circuit.

Also headed to the trials, at Albion Park on Tuesday, is Trojan Banner who is unbeaten in five Queensland starts for Lincoln Farms.

Barnes gave Trojan Banner a freshener after his last win on April 23 so as to time his run at the A$100,000 Queensland Derby on July 20.

“He’s come up good as gold but he’ll need the run tomorrow.

‘He’s still not steering that great - he’s a bit tight in the muscles in his neck and across his rump - but he’ll have acupuncture in the next few days.’’