Platinum Dubai looks set to debut at Otaki later this month after scoring a tidy win at today’s Levin jumpouts.

Trainer Lisa Latta lined up all six starters in the 850 metre heat for two-year-olds and the Pride Of Dubai - Musical Lady filly came out on top after enjoying a cosy run behind the leaders for Zinjete Moki.

Taken to the outside on straightening, Platinum Dubai ran home well to win by about a length in 51.27.

Latta says the $100,000 Karaka yearling is ready for a race and will likely head to Otaki on September 26.

She will be raced by Lincoln Farms and Neville McAlister who also co-owned today’s runner-up Platinum Star and third-placed Platinum Rain. 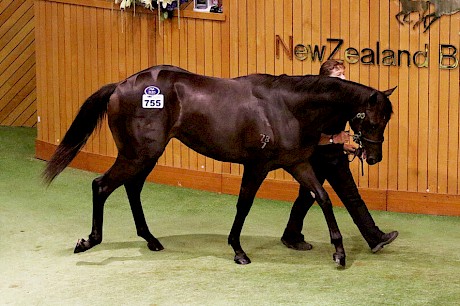 Platinum Rain … rider Shaun Fannin’s favourite horse.Platinum Rain, a Kermadec colt also part-owned by Lincoln Farms, was not extended in running third up the inside rail.

Ridden by Shaun Fannin he jumped and led, again impressing his rider after winning his first jumpout two weeks ago.

“He is Shaun’s favourite horse,’’ says Latta. “He does everything so effortlessly.

“But he is going to the paddock for eight weeks. It’s a great time to have them on the spring grass.”

Lincoln Farms’ fifth-placed filly, by Real Impact from Latvian Amber, will also head to the paddock for eight weeks.

“She sat up on the pace for Charlotte O’Beirne and stayed on nicely up the home straight.

“She did everything well which was pleasing. But she strikes me as more of a three-year-old type and the break will do her good.”

Lincoln’s Gal, ridden by Tim Johnson, sat midfield in a six-horse open heat over 1000 metres and blew out in the straight to run fifth to Rainbow Dundee.

“She didn’t really appreciate the slow track and will take natural improvement from it,” says Latta.

Lincoln’s Gal will either go back to the jumpouts in a fortnight or to the Otaki trials on October 1.