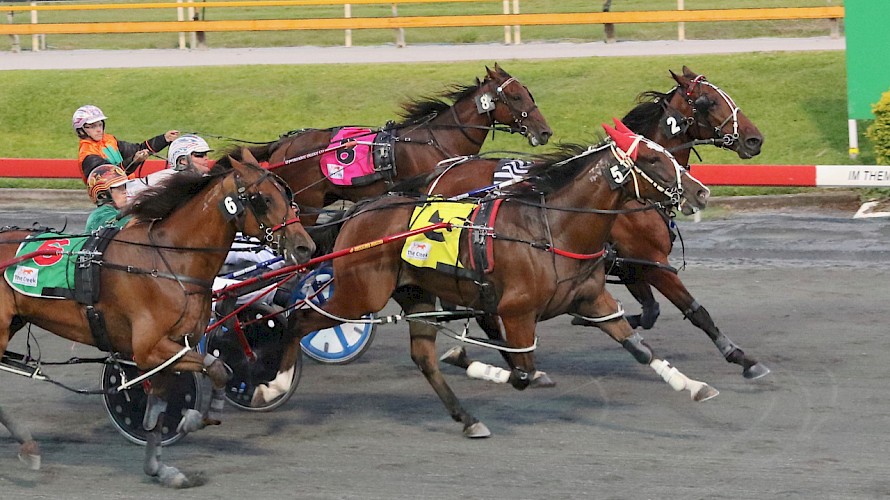 Larry Lincoln (red hood) pierces through the centre for Hayden Barnes and gets up in the last stride to nail Our Madiba at Albion Park last Saturday night. PHOTO: Dan Costello.

Larry Lincoln can lead all the way on Saturday night and ring up just on A$33,000 for the month in earnings for Lincoln Farms, says trainer Al Barnes.

With wins by all three horses he has racing for Lincoln Farms, Larry Lincoln, Northview Hustler and Bondi Shake, Barnes and his son Hayden have had a stellar month.

And with Larry Lincoln an almost certain leader from the pole, Barnes is bullish that the roll can continue in the fifth race at Albion Park.

“Larry deserves to be favourite and he’s got enough respect to lead and win.

“There are some capable horses in the race - Courageous Saint won well on Tuesday - but over a mile Larry will be very hard to beat from in front.”

Larry Lincoln showed a rare brand of speed for a horse of his grade last Saturday night when he came from three back on the outer to nail the favourite Our Madiba on the post.

Barnes says he’s very confident Bondi Shake can back up on his Tuesday win and run a place in the final race.

Bondi Shake faces a tougher field of three-year-olds but Barnes says he’s very bright and is sure to run a “cheeky race.”

“Dance In The Sun looks the winner but he can run second because he chases really well.

“He doesn’t like going from slow to pinging but he’ll sit on a fast speed and chase.”

Bondi Shake showed that determination when he came out of the trail on Tuesday and hunted down the favourite Coppice to score by a nose.

“This is stronger but he’s up to them.”