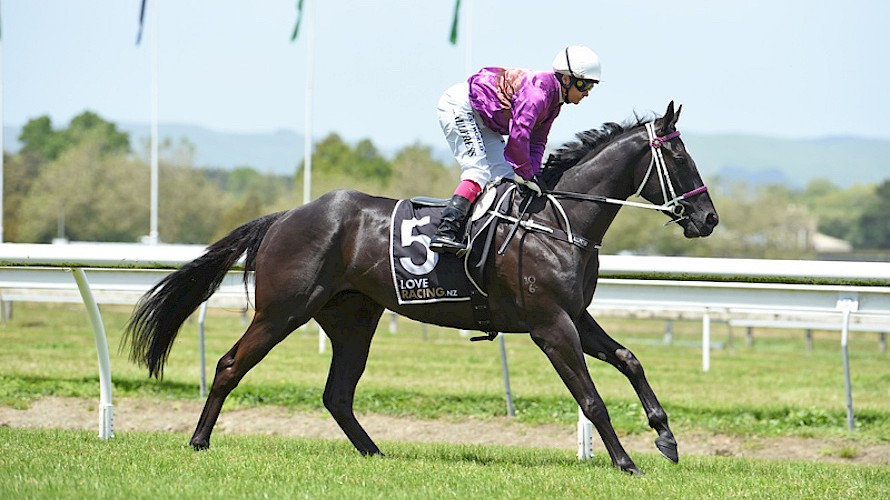 Lincoln’s Kruz is promising but has yet to race in wet ground. PHOTO: Peter Rubery/Race Images.

A drying track will help promising galloper Lincoln’s Kruz when he resumes at Awapuni on Saturday.

Trainer Lisa Latta reports that after a beautiful day in Palmerston North today, the ground has come back from a heavy 11 and may even race more like a slow 9 come start time.

Lincoln’s Kruz, who is showing good ability for Lincoln Farms and its partners, has not raced since Boxing Day but has trialled twice in preparation for Saturday.

On each occasion he has battle through heavy 10 conditions, blowing out late when third in his first trial at Foxton then fourth after an interrupted run at Otaki.

Rider Jonathan Riddell told Latta the Kuroshio three-year-old seemed to handle the track in his latest appearance, albeit losing momentum when putting his foot in a hole halfway down.

“He’s racing in the first half of the day and hopefully it won’t be too sticky by then. I’m sure he’ll be a better horse on better footing but we’ve got to find out if he handles it wet. I can’t see us finding a slow track anywhere this month and he might as well go back into the paddock for a month if he doesn’t go in it.”

Lincoln’s Kruz, fourth behind Marscapone in a stakes race at Trentham last December, has opened up the equal third favourite at $6.50 behind debut runner Ted Can Too and Tony Pike’s Cathay Nova.

“There’s not a lot of exposed form in the field and, if he handles the track, I’d expect him to be right in the thick of it.”

Lincoln’s Kruz will have only two outside him at the jump but has experienced hoop Darryl Bradley doing the steering.

Smart mare Platinum Rapper ($16) strikes a strong field in the eighth race and Latta is hoping she doesn’t get too far back with 3kg claiming apprentice Temyia Taiaroa in the saddle.

“She has had a jumpout and a trial to prepare for this so, with the right run, should be right in the mix.” 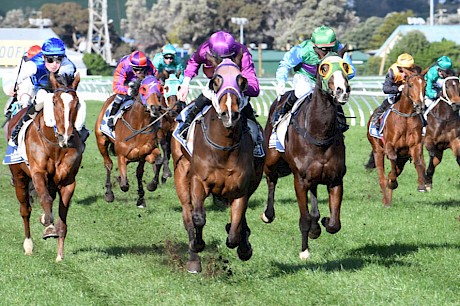 Lincoln Dreamer … adept in the wet. PHOTO: Peter Rubery/Race Images.But a better bet might be Lincoln Dreamer ($4.80) in the ninth race because it is pretty much devoid of form.

Lincoln Dreamer, a winner in heavy 11 ground at Wanganui last August, gets top apprentice Kozzi Asano who will claim down to 60kg.

“He’s been working really nicely and even though I think 1400 metres is short of his best, he will try to get home.”

The Savabeel five-year-old struck form straight away when fresh this time last year.

Lincoln Farms’ day wraps up with Benny Lincoln ($11) in the 10th race. Latta expects he will need the run with only one jumpout under his belt but she doesn’t think the wet ground will stop him.