Trainer Lisa Latta is hoping the strong winds keep the rain away from Woodville before Thursday for Lincoln Star who looks to be on the verge of his best form.

The Savabeel five-year-old might have been one of the outsiders on premier day at Hastings last time but he lived up to Latta’s predictions with a bold fourth on the improved dead 4 footing.

And had Lincoln Star not been badly inconvenienced and pocketed soon after turning for home, he would have run winner Yamuna much closer than five and a half lengths. 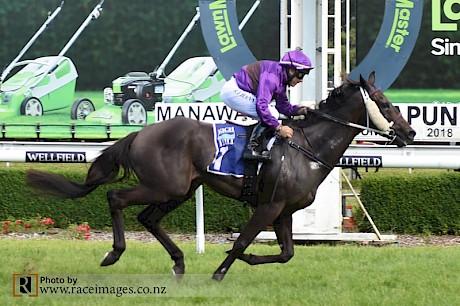 Lincoln Star showed dramatic improvement at Hastings and can go on with it at Woodville on Thursday. PHOTO: Peter Rubery/Race Images.It was the first sign of form from the talented galloper since the summer, his campaign thwarted by very heavy tracks.

With 10 to 15ml of rain forecast tomorrow and the track already downgraded to a slow 7, Latta fears the going might again upset the horse.

“If it got to heavy he won’t run, but in the dead to slow range he’d be OK.

“He has trained on well since his good run at Hastings. The outside draw doesn’t help but we will be positive, go forward, and try to get some cover. With luck, he should be in the finish.”

Latta definitely won’t be running Ajay Lincoln in the second race if the ground deteriorates further.

“We can’t run him again on another heavy track. He’s such a good mover and is hopeless in bad ground.”

Ajay Lincoln beat only one home on dead 6 footing at Wairarapa last time and was completely bogged down before that at Riccarton.

But Latta is hoping she can start the four-year-old who needs another run over 1600 metres before stepping up to a middle distance, a trip rider Robbie Hannam predicts will see the best of him.

“He has a wide draw but will move in a lot when the ballots come out.”