Lisa rapt with Platinum Rapper today - tune in to hear her best beats at Awapuni, July 4

Platinum Rapper was easily the most impressive of the four runners trainer Lisa Latta produced for Lincoln Farms, running away with the open 1000 metre heat.

On her favoured heavy ground, the mare sat back last, travelled up nicely in behind the leaders turning for home and let down stylishly down the outside to win by a couple of lengths.

Latta was rapt with the win, under heavyweight jumps rider Shaun Fannin.

“She’s come up really well and it was a very good effort today. She’ll be ready to go at the first meeting here on July 4.”

Latta wants to build on the mare’s black type record and will look at contesting the Merial Mile at Awapuni in September. 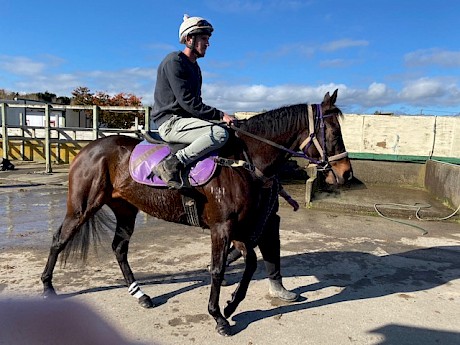 In the hands of apprentice Faye Lazet, Lincoln Dreamer jumped smartly, sat in second spot and reached the lead just after turning.

“He kicked really nicely in the straight and just loved the ground,” says Latta. “He’s always liked wet tracks - his form went off only because he was running on good ground.

“I’m really happy with him.”

Latta is keen to return to Wanganui on July 10 with Lincoln Dreamer where he won his maiden in heavy 11 ground last August.

Benny Lincoln, placed once in four starts in his first prep, showed improvement to run second for Lazet, beaten only half a length.

“He jumped right there, quickened up nicely turning in and went to the line really well.

“He handled the track well.”

Latta is likely to give Benny Lincoln one more hitout before lining him up at the races.

“But he’ll be running in the first weeks when we come back.”

Consistent galloper Lincoln Town, placed in five of his seven starts, ran only third in his 1000 metre maiden heat but did not disappoint Fannin.

“He only came to the end of it over the last 200 metres and still battled away,” says Latta.

“He had a really good blow afterwards so will improve a lot with the outing.”