Punters should see a stronger and more sensible Lincoln Hanover when he resumes from a 10-month break in the opening race at Wanganui on Saturday.

Now five, the Showcasing gelding has been placed in eight of his 11 races but habitually brought himself undone before even jumping from the gates, according to trainer Lisa Latta.

“He used to get quite wound up before the start - his mother Princess Lincoln was the same - but he seems much more settled this time in.” 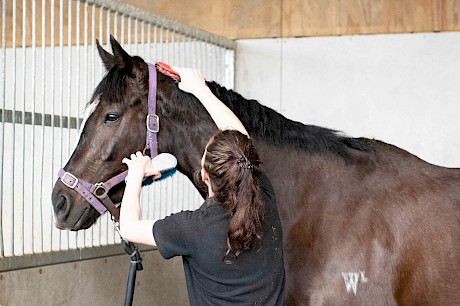 Lincoln Hanover … stronger and more sensible. PHOTO: Royden Williams.Latta says Lincoln Hanover is also a stronger looking version than the on-pace runner who never seemed to round his races off last season.

The horse showed he was ready to resume when kicking on strongly to win a 1000 metre trial at Foxton a month ago.

And the fact he handled an off track that day, officially rated a slow 8 but actually playing a little better, gives Latta some confidence that he might cope with the rain-affected conditions on Saturday.

Heavy showers turned the Wanganui track to a heavy 10 on Friday morning but with finer, and windy conditions now prevailing, Latta is hoping it will come back to at least a slow 8.

“He will also have first use of the track which is going to be a good advantage.”

Lincoln Hanover, with the benefit of the two gate, should plant himself right on the speed and, having gone forward since his trial, Latta expects him to turn in a bold showing.

Bookies opened the horse a $3.50 second favourite behind the Fraser Auret-trained Tudor Queen ($3.30).

Lincoln Farms only other acceptor on the day, Platinum Dubai, is a very doubtful starter in the third race.

Latta says the Pride Of Dubai filly is a real speedster who needs good footing.