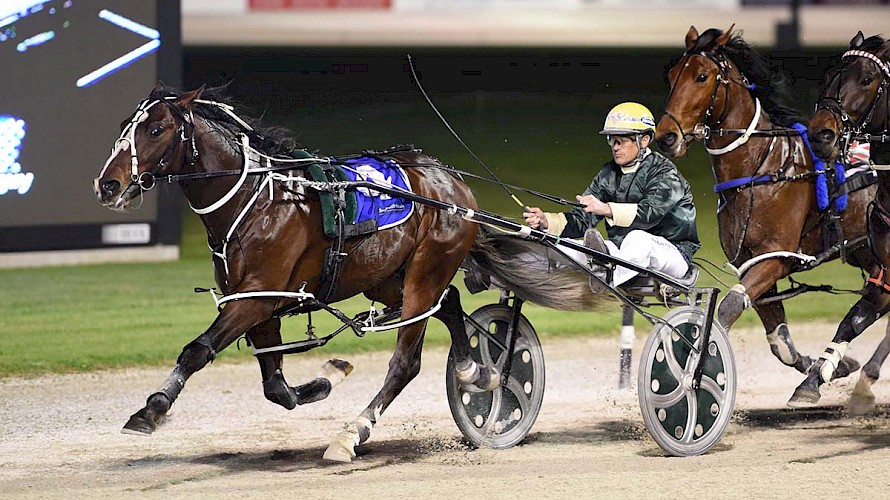 American Dealer should be far too good for his opposition at Cambridge. PHOTO: Megan Liefting/Race Images.

Little American Dealer will start at a little price at Cambridge - $1.45 and set to shorten

It’s no surprise the TAB bookies have American Dealer a $1.45 favourite for Thursday night’s Sires’ Stakes heat at Cambridge.

Given the way the little colt rocketed home from last on the home turn at Auckland last Friday, it’s a fair bet he might get even shorter come the last race of the night.

American Dealer was driven very conservatively last week, last all the way, and didn’t move until the field had straightened up for home.

His performance to get within 3.7 lengths of winner Kango was the subject of a stewards’ inquiry when driver David Butcher was quizzed over his tactics.

Butcher explained that up in class, against older horses, he had little option other than to restrain to the rear early from seven on the gate when unable to secure a position in the running line.

Butcher said he did not get a trail into the race as he had hoped and that when the tempo increased markedly from the 600 metres he felt he would not be able to make up ground three wide on the final bend.

Butcher said he believed his best option was to save the colt for a final run in the home straight.

Times like that would be enough to account for easier rivals on Thursday when Ray Green’s colt has only six others to beat.

“Based on what we’ve seen so far you have to label him a serious winning chance,” Green said.

“He should be able to get over the top of them, especially in a small field.”

The only fly in the ointment could be pole runner B D Joe, who in his last two starts has run third in the Harness Millions and fourth, behind American Dealer in the postponed Two-year-old Sires’ Stakes Final.

Green doesn’t expect Captain Nemo or Apieceoflou to threaten their stablemate from the two outside draws.

But Green says with a little more luck than they’ve had in recent starts either of them could place. 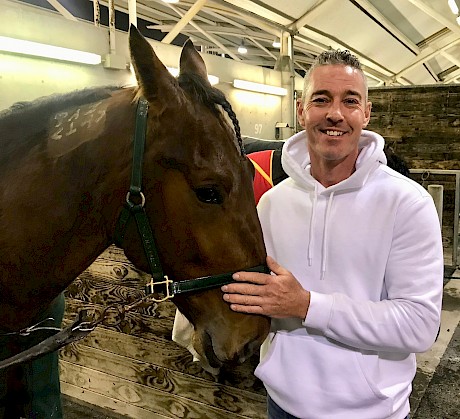 Part owner Gareth Paddison with Captain Nemo.Captain Nemo was expected to go close at Auckland last week, dropping down in grade from racing the best three-year-olds. But after getting parked out, he started over-racing, and David Butcher eventually went to war with pacemaker Edam Fast.

“David had to let him roll in the end and he just did too much. He was hitting a knee as well which wouldn’t have helped.”

Green said Captain Nemo might be better suited the left-handed way round at Cambridge, a track where he cleared maidens in July.

Green says Apieceoflou will start in the Sires’ Stakes heat in preference to the seventh race, where he drew the second row.

“It’s only a small field so he won’t be far off them in the running and it would be nice to see him race up to what we think he can do.

“And if he can lob a place it would put more value on him.”

Green said Apoieceoflou would also earn more from running last ($500) in the Sires heat than if he finished fourth in the earlier race.
Apieceoflou’s career-long unlucky streak continued last week at Auckland when he lost his running line spot a round from home as the field took evasive action to avoid the breaking leader.

He ended up three wide and was forced to make a run at them, ending up parked 600 metres out, with a petrol tank blinking on red. 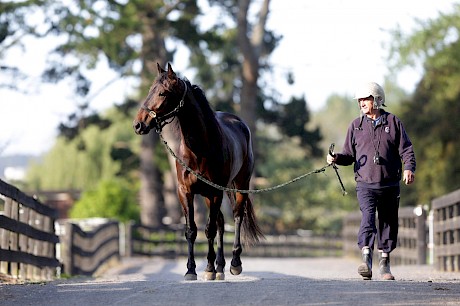 Trainer Ray Green wth Bondi Shake. PHOTO: Trish Dunell.Bondi Shake will get his best chance yet in the seventh race, Green labelling his drawing the pole as a big win.

“If he’s ever going to win a race this will be it as he loves leading,” said Green.

“He’s had terrible draws and the only time he led he was just pushed a bit too hard. He certainly has the ability to win a race like this.”

Revitalise was the big improver last week at Auckland and will be a chance in the eighth race despite his second row draw.

Revitalise was driven quietly last week, second last early then three back on the outer, before making a strong run round the home turn and sustaining it to the post for second, albeit distant, to the capable Mr Fantastic.

“He’s obviously a lot better suited when driven as a sit-sprinter. In the two runs where he sat back, he got home not badly. And the other time when he was put in the race he didn’t finish it off.”