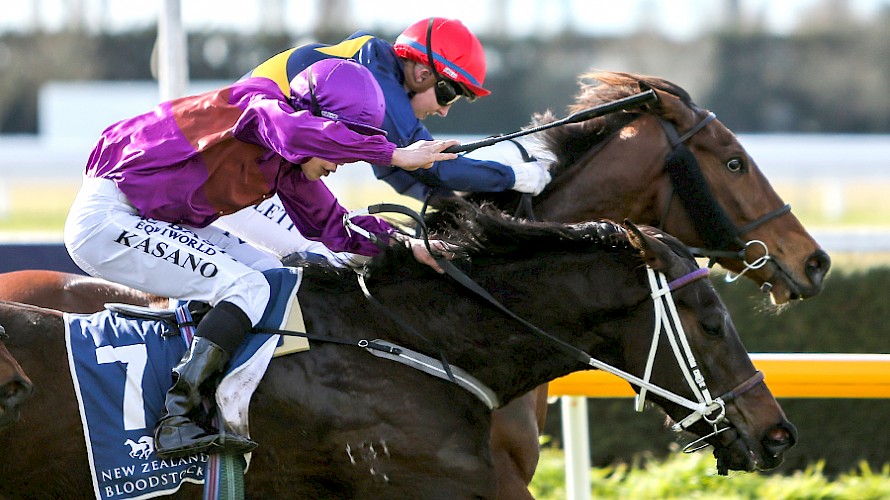 Kozzi Asano gets the best out of Platinum Rapper to nab Look Out a head at Riccarton today. PHOTO: Ajay Berry/Race Images.

Look out, here comes Kozzi on the Rapper! And he rode the mare to perfection

Apprentice Kozzi Asano got the biggest rap after Platinum Rapper speared through late to win at Riccarton today.

Just four days after a draining run in the Winter Cup, Platinum Rapper’s connections had been worried she might struggle to see out 2000 metres in the rating 82 event.

But after virtually tailing off last, then getting into heavy traffic in the run home, Asano found the gaps late and the mare powered through to nail Look Out a head.

Co-owner Neville McAlister said he and Lincoln Farms owner John Street gave the four kilo claimer just one instruction: ‘Go back to last and be as patient as you can.’ 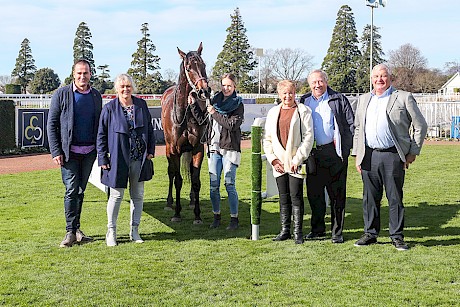 Winners are grinners … from left, Neville McAlister, Lisa Latta. Lynne Street, John Street and Ian Middleton. PHOTO: Race Images.“He did exactly that,” said McAlister. “It was a very special ride. Everyone else was scrubbing up on the home turn and he was still sitting there quietly - and she was still travelling.

“Most senior riders would have been up her by then.”

Trainer Lisa Latta made the decision to back up today only on race morning after Platinum Rapper pulled up very jaded from her Winter Cup effort when she weakened late to run 10th.

“Her run was way better than it looked as she was stuck in the worst part of the track on the inner and was still there until about 150 metres out,” McAlister said.

“She was still quite tired on Monday morning but started to pick up on Monday night.

“We wanted to test her over 2000 metres to see where we go when she comes back. She’s going out for a two month spell now and we needed a guide on whether to keep her to 1400 metres to a mile next time or to go over more ground. 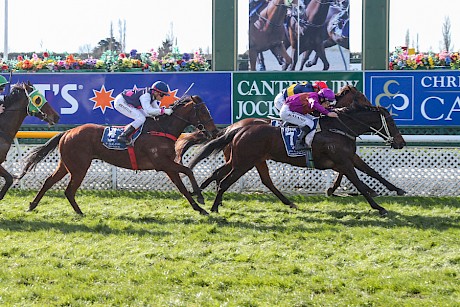 Platinum Rapper bursts through the gap to beat Look Out and Owen Patrick. PHOTO: Race Images.“This win ticks a few boxes for us.”

“She’s done an awful lot this preparation. If you compare her record with her half sister Platinum Command, she’s had four wins now and got black type in a weight-for-age race while Platinum Command had won three at the same stage.

“And when you consider she was born in October so is still really only three years old, she’s done pretty well.”

Platinum Rapper goes to the paddock with the impressive record this preparation of 10 starts for earnings of $54,500.