Make Way had a sharpen up in a trial at Melton on Tuesday but he’s still expected to need the run when he resumes there on Saturday night.

Trainer Sonya Smith elected to give the horse a quiet trial after he missed a race two weeks ago with a bad cold and partner Anthony Butt just let him tootle along behind his rivals.

“They ran a bit of time so I just sat back and let him sprint home,” said Butt. “And he ran up the straight really well.”

No official time was taken in the four-horse heat won by January’s Mercury80 1200 metre dash winner Always Fast but the opposition was solid with runner-up Alice Kay the winner of her last two starts and third-placed Two Times Bettor a 13-race winner for Emma Stewart. 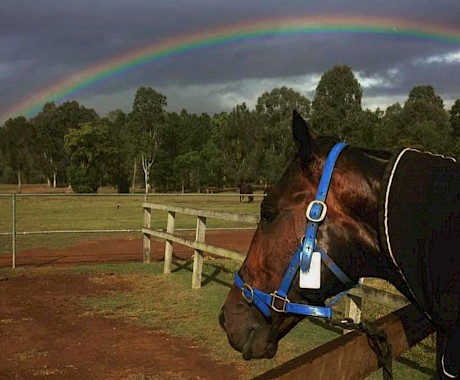 Make Way … there’s unlikely to be a pot of gold at the end of the rainbow this week.Make Way was last of the quartet, 11.5 metres from the winner but only a head from third at the line and closing nicely.

“We don’t normally trial our horses so close to a race but it was a good little hit out for him.

“He’s going to need the race on Saturday, because he hasn’t raced for so long - I’m picking he’ll be half a run short.

“It’s a pretty tough field but he should get a good run from one and I’m sure he’ll still go well.

“He has gate speed so I’ll come out and then weigh it up after that.”

Make Way hasn’t raced since June when he was sidelined with a lingering foot abscess and, just when he was ready to go again, he developed an inflamed throat soon after travelling to Melbourne.

But he has been a consistently good performer for Smith and Butt since arriving in Australia in January, 2019, winning 11 races and placing another eight times.