Trainer Al Barnes will take Man Of Action and Larry Lincoln to the races next week with plenty of confidence after they all but dead-heated for first in a trial at Albion Park today.

Lincoln Farms’ latest imports contested a 1660 metre heat and finished with only a nose between them in the good mile rate of 1:54.8.

Both horses were handled quietly out of the gate, Hayden Barnes first to move on Larry Lincoln, taking the lead at the bell. 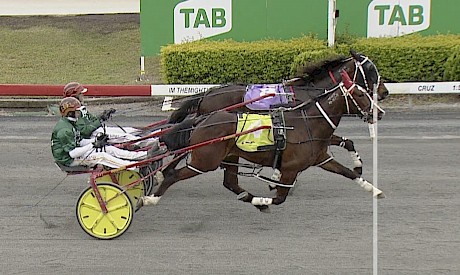 Man Of Action, inner, and Larry Lincoln all but dead-heat in a trial at Albion Park today.While he held on by the narrowest of margins, Al Barnes says Man Of Action will need a few little fixes before next week.

“Brendan was rapt but said the horse was hanging in a bit and we’ll give him an ultra sound because he’s feeling his hamstrings and stifles a bit. He humps up when you put the crupper on.

“Larry was doing it easily at the line and could have put a couple of lengths on the other horse the way he was cruising.

“Hayden was really happy with him. Both their heart rates were good - Larry’s was a little higher.

“They both did a bit of work in the run and are ready to go. There are a couple of nice races for them next Friday.”

Man Of Action, a last-start runner-up at Auckland, starts his Queensland campaign with a record of two wins and seven placings from 19 starts. Larry Lincoln, more of a sit-sprinter, has one win and one placing from seven starts.