Trainer Al Barnes is hoping he can get a few more horses like Man Of Action from Lincoln Farms after his gutsy all-the-way win at Albion Park today.

In just his third start in Queensland, Man Of Action showed a torrent of gate speed to claim the front and lead all the way at the good odds of $6.

“He’s just the right type of horse to race here,” said Barnes. “He has gate speed and a bit of heart.

Man Of Action won only twice in New Zealand from 19 starts but he was a consistent placegetter, form which he is already franking in Brisbane. 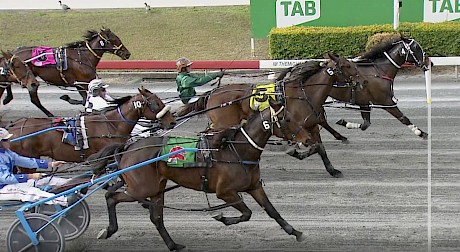 Man Of Action fights bravely to stave off Our Balou and the fast-finishing Soho Tsunami.At his first start he led until one stride from home and at second time of asking he was held up in the trail by the weakening leader before powering home for second.

Today, driver Hayden Barnes took bad luck out of play when he put the accelerator down out of the gate and easily crossed the three horses inside him.

“That’s where you’ve got to be at the moment with the way the track’s playing. They’re just not winning from the back.”

And with the mile rate for the 2138 metres only 1:58.3, it made it hard for the late closers to catch him, parked runner Our Balou holding second, a neck away, with a head to the fast-finishing Soho Tsunami.

“It was a nice win and Hayden was happy, he said the horse put in well.

“He’ll go through the grades and win his share here.”

* Resuming stable star Northview Hustler has drawn badly, one from the outside in Saturday night’s seventh race, with state champion Colt Thirty One outside him.